The war in Ukraine rages on after the invasion was launched by Moscow on 24 February.

Fighting has forced more than ten million Ukrainians to flee their homes and more than 3.5 million to flee the country, with thousands of people killed or wounded and widespread damage in the wake of shelling and aerial bombardments.

See our summary of Wednesday's updates below and watch in the video player above.

A senior Russian official says the country’s nuclear arsenal should help deter the West from intervening in the war in Ukraine.

Dmitry Rogozin, the head of the state corporation Roscosmos, noted in televised remarks Wednesday that the Russian nuclear stockpiles include tactical nuclear weapons along with the nuclear-tipped intercontinental ballistic missiles.

Rogozin pointed at Russian President Vladimir Putin’s warning to other countries not to meddle with the Russian action in Ukraine. “The Russian Federation is capable of physically destroying any aggressor or any aggressor group within minutes at any distance,” Rogozin said.

Rogozin’s statement comes amid Western fears that Russia could use battlefield nuclear weapons against Ukraine amid the stalled Russian offensive.

U.S. officials have long warned that Russia’s military doctrine envisages an “escalate to deescalate” option of using battlefield nuclear weapons to force the enemy to back down in a situation when Russian forces face an imminent defeat in a conventional conflict. Moscow has denied having such designs.

The French car manufacturer has announced it is suspending activities at its factory in Moscow immediately, and will evaluate options concerning its participation in its Russian subsidiary AvtoVAZ.

Earlier, Ukraine's President Zelenskyy said French firms still operational in Russia were supporting the "war machine", while Foreign Minister Dmytro Kuleba followed up with a call for a global boycott of Renault.

The US president landed in Brussels shortly after 2100 CET in a bid to demonstrate Western unity to Vladimir Putin and discuss further action in the face of Russia's aggression in Ukraine.

He will attend three key key meetings on Thursday -- held by NATO, the G7 and the EU -- before visiting Poland on Friday and Saturday.

The extraordinary coincidence of the three high-level encounters responds to the deteriorating situation inside Ukraine.

Biden's visit is meant to strengthen the US response on "three critical fronts," according to National Security Advisor Jake Sullivan: to equip Ukraine militarily, impose more costs on Russia and reinforce the Western alliance.

"We are prepared and committed to this for as long as it takes," Sullivan said during a press briefing.

Biden himself has warned that Putin might be considering resorting to biological and chemical weapons to speed up the military campaign, a scenario that would open a dangerous and unpredictable chapter in the month-long war.

Dmytro Kuleba, Ukraine's Foreign Minister, has tweeted to call for a global boycott of Renault which he says "refuses to pull out of Russia".

Earlier, President Zelenskyy cited companies such as Renault, Auchan and Leroy Merlin as he told the French parliament that the country's firms should stop supporting "Russia's war machine".

The Biden administration on Wednesday made a formal determination that Russian troops have committed war crimes in Ukraine and said it would work with others to prosecute offenders.

The statement from Secretary of State Antony Blinken came as he travelled to Brussels with the US president for an emergency summit of NATO leaders.

The assessment was based on a “careful review” of public and intelligence sources since Russia launched its invasion of Ukraine last month, he said.

America's top diplomat said the United States would share that information with allies, partners and international institutions tasked with investigating allegations of war crimes and crimes against humanity.

He cited attacks on the civilian population in the besieged city of Mariupol and elsewhere.

Reuters quotes two sources as saying that Anatoly Chubais quit over the war in Ukraine has left Russia with no intention to return. He hung up the phone when contacted by the news agency.

Kremlin spokesman Dmitry Peskov wouldn’t say if Chubais had left the country, saying it was his private business.

Chubais, the architect of Russia’s post-Soviet privatisation campaign, has served at a variety of top official jobs during the past three decades.

After Russia began its last month, Chubais posted a photo of Boris Nemtsov, a leading Russian opposition figure who was shot dead near the Kremlin in 2015. Even without a caption, it was seen as a powerful statement from a Moscow insider.

A senior NATO military officer says the alliance estimates that Russia has suffered between 30,000 and 40,000 battlefield casualties in Ukraine through the first month of the war, including between 7,000 and 15,000 killed. It is NATO’s first public estimate of Russian casualties since the war started Feb. 24.

The military officer, speaking on condition of anonymity under ground rules set by NATO, said the estimate of the number killed is based on a combination of information from the Ukrainian government, indications from Russia, and open-source information.

The U.S. government has largely declined to provide public estimates of Russian or Ukrainian casualties, saying available information is of questionable reliability.

The NATO military officer, in a briefing from the alliance’s military headquarters in Belgium on Wednesday, said the estimate of 30,000 to 40,000 Russian casualties is derived from what he called a standard calculation that in war an army suffers three wounded soldiers for every soldier killed. The casualties include killed in action and wounded in action, as well as those taken prisoner or missing in action, the officer said. (AP)

"The gates of hell have to open so people can come out," said Amin Awad, the United Nations Crisis Coordinator for Ukraine, noting that Russia has not yet responded to the UN appeals for humanitarian corridors.

Mariupol continues to be encircled by the Russian army. More than 100,000 residents are believed to be trapped in the port city, a strategic target for Moscow, with little or no food, water, electricity or heating. 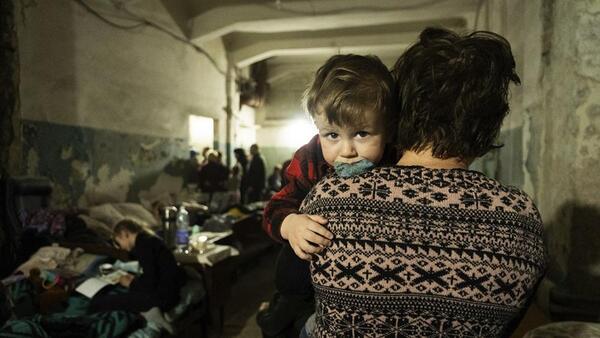 Open the gates of hell for civilians in Mariupol, says UN's Amin Awad

euronews "It's very hellish over there, and I think the gates of hell have to open so people can come out." #EuropeNews
15:38

"French companies must leave the Russian market. Renault, Auchan, Leroy Merlin and others, they must stop being sponsors of Russia's war machine", he declared in a speech broadcast by videoconference before French deputies and senators.

Zelenskyy compared the Russian destruction in his country to the Battle of Verdun in World War One.

"Mariupol and other cities remind us of Verdun," Volodymyr Zelenskyy said by video link.

'The Russian army do not distinguish between the objects they target, they destroy everything: residential districts, hospitals, schools, universities, everything," he said. "They've brought terror to Ukrainian territory." 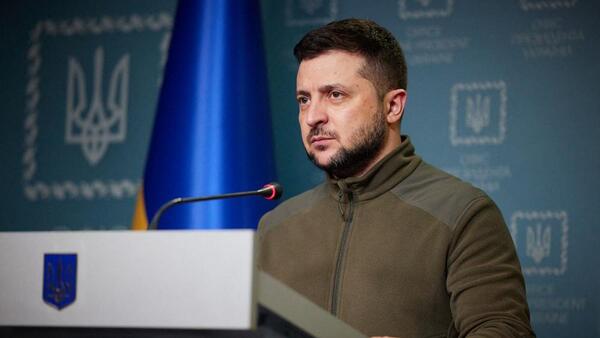 "French companies must leave the Russian market. Renault, Auchan, Leroy Merlin and others, they must stop being sponsors of Russia's war machine," the Ukrainian president told French lawmakers.