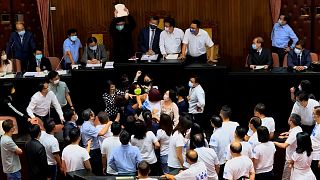 Lawmakers rushed to the speaker's podium as Speaker Su Tseng-chang began his annual speech on the government's performance, focusing on national security and the economy.

Some were pushed to the ground and others poured water bottles on their opponents, while Su was unable to deliver his speech.

The protesters demanded the speaker's resignation because of his government's handling of the COVID-19 pandemic.

Last year, Nationalist Party members brought pork casings into the chamber and threw them into a melee to protest Taiwan's lifting of the ban on U.S. pork products.