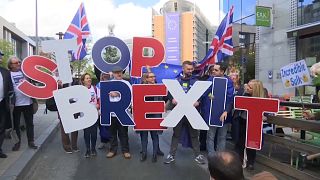 Protest against Brexit as outline deal is reached

Around 50 anti-Brexit demonstrators gathered near the European Council building in Brussels on Thursday as the EU and the UK announced that a Brexit outline deal had been reached.

One of the demonstrators, who dressed up as Incredible Hulk, a fictional character UK Prime Minister Boris Johnson compared himself to during Brexit negotiations, smashed a Brexit sign with a hammer during the protest, while others were chanting anti-Brexit slogans.

None of the protesters were supporting the deal, saying that staying in the EU would be a much better option on the whole for both sides.