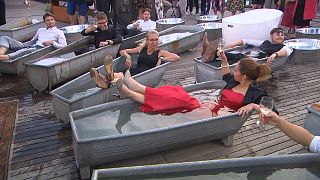 Listening to opera from a rooftop bathtub: Czech!

Czech opera singer Adam Plachetka sang arias from the opera Don Giovanni by Wolfgang Amadeus Mozart on Thursday( August 29) to people lying in bathtubs at the rooftop of Lucerna building in Prague.

There were 30 bathtubs full of water, but only nine brave spectators used them - in formal clothes, some with sparkling wine in hand.

The actual musical performance took about half an hour. It wasn't just Plachetka, other singers took part.

The Lucerna building bears the distinctive elements of the fading Art Nouveau movement and the Modernism that was emerging when it was completed in 1921 by the grandfather of President Václav Havel.

In 2014, Prague-based cafe owner and impresario Ondřej Kobza, who was looking for a suitable roof where a community garden could be built along the lines of the Brooklyn Grange Farm phenomenon, received permission from the Havel family to open the Lucerna rooftop.