Residents of Kyiv are offering football fans a free roof over their heads for the Champions League climax later this month.

They mobilised on social media after noticing prices for hotels had shot up.

The Ukrainian capital will host the final of Europe’s money-spinning football tournament, which will see Liverpool take on Real Madrid.

Locals offered up their homes after a comparative map emerged on Twitter showing Kyiv accommodation prices before and after the final.

One place was advertised for €1,592 for the evening of the final — Saturday, May 26 — before falling to just €17-a-night the following Wednesday.

Groups were set up on Facebook to match bed-seeking football fans with locals offering a free couch for the night.

The forum, a taste of which you can browse in the photo gallery below, has also been used to help visiting fans find their feet in the city.

Its founder, Viktor Kylymar, told Euronews he set up the group when he saw accommodation prices "skyrocketing".

"The message about our initiative is spreading, we now have more than 6,000 subscribers and a lot of success stories: guests finding their hosts and vice versa. We expect the number of group members to grow and more positive stories to come."

Kylymar said the group had been "like a fairytale". After the final he intends to freeze the group and leave it as a memento to Kyiv's hospitality.

Igor Krykun, a member of the group, said: "After seeing so many cases where hotels and apartment owners increased their prices by ten times, I felt angry. That is not how I want my country to be seen worldwide.

"I realised that instead of expressing my opinion on social networks I can do something myself to change the situation.

"So our family invited Ad Caren, a Liverpool fan, with his father and friend to stay in our apartment for free for a couple of nights around the final. I also suggested to meet them at the railway station.

"I see many others do the same and that's very inspiring. Together we can change things." 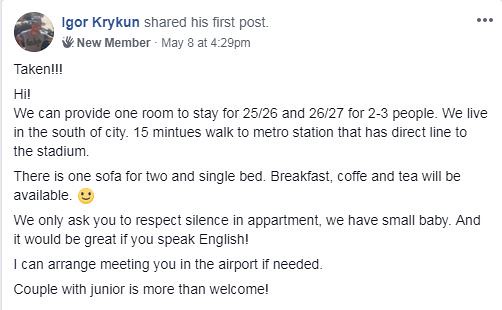 Icelandic Liverpool fan Kristofer Arnar Einarsson regrets that he cannot stay in Kyiv longer and hopes to return again. He has found free accommodation through the group. "What a great initiative. The amazing power of social media and generosity of the people of Kyiv," he said.

Another Liverpool fan Mike Fallon said: "We have been offered plenty of places from very kind people. We haven’t taken up the offers as we have changed our plans. We are now driving across in a motor home. However, I have received some priceless information from the kind people of Kyiv."