Most Venezuelans crossing the Simón Bolívar bridge are fleeing their country for food and medicine.

Cúcuta is the principal border point into Colombia with up to 40,000 people passing every day.

One lady who we cross has arrived with acute appendicitis. She has made it just in time.

On the Venezuelan side of the border, crumbling hospitals are at breaking point. Now in its fifth year of recession, the International Monetary Fund forecasts inflation will hit 13,000% in Venezuela by the end of this year.

In middle of 2017, the Red Cross, funded by the EU Humanitarian Aid office, set up a reception facility next to the bridge in a bid to alleviate a crisis it says nobody wants to see or talk about.

Javier Francisco Gonzalez, the country manager from the German Red Cross says: "The Red Cross has been opening and closing this post every morning and night. As a way to raise our hand and say: 'Something is happening here and we need to draw attention to this'. It's an invisible crisis on both sides."

Three nurses and a doctor are always on duty in the first aid tent.

Many people come with chronic diseases. They often need simple, cheap, medicine, which is no longer available in Venezuela.

There are also cancer patients desperate to restart treatment, as well as the malnourished.

Juan Carlos Gonzalez, a Red Cross coordinator at the emergency facility says: "We are providing assistance to a person who fainted. We brought him here and it looks like he is suffering from malnutrition. Every day we treat five to six cases of malnutrition."

The Red Cross post is located next to the migration office, where over 3,000 migrants queue daily to have their passports stamped. Many have taken days to cross the border.

Getting in touch with their families is a priority.

One man, who was a professional bull-fighter in Venezuela wants to go to Peru with his wife. They are looking for work to send some money home to their three children who they have left in Venezuela.

"The first thing was charging the phone to call our family. We haven't heard from them for four days. (The guards on the Venezuelan side) are charging 10 dollars per person to stamp their passport. If you don't have it the queue lasts for days and days and days. This has to be done for free. You cannot charge for it."

Faced with this massive influx of migrants, Colombia has called for international help.

He announced Europe would be providing 2 million euros to Venezuela and 6 million to Colombia.

Speaking to Euronews the EU Commissioner said: "For the Colombian authorities it is a huge challenge to deal with this unprecedented situation, because of course they face also their challenges in their country about the reconciliation process and peace process. So, our humanitarian aid is going in both sides, inside Venezuela and inside Colombia. Especially in Venezuela we are trying a lot in order to find ways in particular to provide medicines and to find projects to deal with acute malnutrition."

Venezuelan families are constantly settling in Cúcuta. Illegal migrants, with no documents, are moving into the city's deprived neighbourhoods.

The Norwegian Refugee Council, with EU Aid, is organising activities for 500 children not in school.

Area Mananger Luz Yadyra Galeano Saavedra says the goal is to get them back into the classroom.

"Children can now have access to the schools, but their right to enroll doesn’t mean they'll be able study. That's because many of these children live irregularly in the country. Their parents have no documents enabling access to any kind of legal right inside Colombia. What does this mean? It means for example that these kids don’t receive any certificate when they finish the school year," she says. 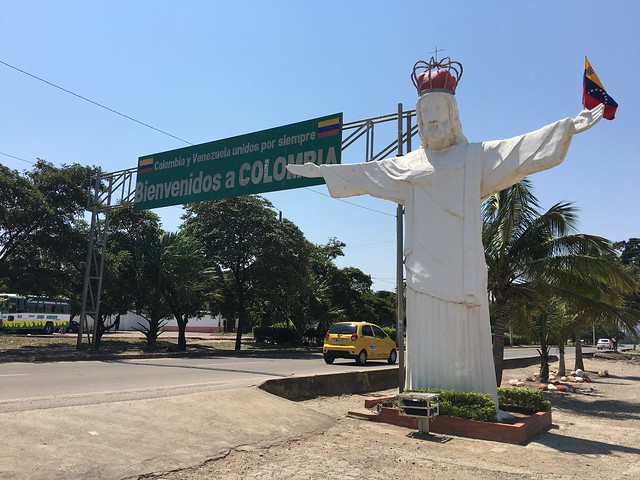 Some 4,100 Venezuelan pupils are registered at school in the department of Norte de Santander. Andreina's daughters are among them.The family settled illegally in Cúcuta three years ago. In Venezuela Andreina was a nurse and says she had a normal life. Her daughters and nephew had to wait one year before they could go to school.

"The children are managing to study regularly. Regularly in terms of their documents, but financially it's not normal. It's not easy to maintain three children at school when you are a foreigner without documents. If you manage to get food, how is it possible to buy items, like school uniforms, shoes. That is very difficult," she says.

It's estimated that 230,000 illegal migrants live in Cúcuta.

The UNHCR is working with the Government in an attempt to register them and improve their conditions both on arrival and long-term.