Already one of the poorest countries in the world, conflict has been raging in the Central African Republic since 2013.

To date, up to 6,000 people have been killed in executions and mutilations.

Around half the population — some two and a half million people — is in need of humanitarian assistance.

There are some 690,000 internally displaced people. Another half a million have fled to neighbouring countries.

The village of Boda lies west of the capital Bangui, in what is considered a post-conflict area.

It’s a stark contrast with the situation in the rest of the country.

Today, armed groups control almost all central and southern provinces. Political instability and religious and inter-ethnic tensions have risen over the last year.

AIDZONE | Central African Republic, here we are. CAR is among the poorest countries in the world. Violence has touched the levels of 2013-2014, and hotspots have multiplicated, with massive increase of displacement. We are going to travel in the region. Stay tuned pic.twitter.com/tgcM0qXwz6

Boda still carries scars from years of violence but Christians and Muslims are slowly learning to co-exist.

The EU-funded NGO Alima runs Boda’s maternity hospital and a network of remote health centres around the clock.

In the first few weeks of 2018, Boda’s maternity hospital assisted in the births of just over 100 babies.

Safe births can’t be taken for granted in a country where nearly half of all health structures have been damaged or destroyed by the ongoing conflict.

Today I have witnessed the birth of a beautiful girl #CAR. Here 34% of health structures have been destroyed by the ongoing conflict and the maternal mortality rate is among the highest worldwide. So, what I saw is a double gift. Well done alima</a> and eu_humanitarian aid pic.twitter.com/QquMfkQcKq

The Central African Republic ranks second in the world for both maternal and infant mortality. One woman in 25 dies from complications linked to pregnancy or giving birth.

“The main difficulty we face is the limited number of (qualified) doctors,” says pediatrician Karim Assani, who works with Alima in Boda. “Here, only one doctor was provided by the Ministry of Health for a population of 116,000 people. Alima provides two additional doctors to back up the one in charge”.

Last year, a thousand babies were born with the assistance of the NGO. Alima’s staff also carried out more than a hundred caesarian sections. Complex births in areas where mothers have no access to medical assistance are often synonymous with death.

“This patient came from far away,” Assani says on a tour of the small ward. “She was five kilometers away from the nearest health centre. She was then transported to Boda by motorbike and she had a caesarian an hour later. It wasn’t easy but luckily we’ve managed to save the baby and the mother is also doing very well”.

Irène is Christian and is recuperating at the hospital with her baby next to a Muslim mother, Bintu.

This wouldn’t have been possible a couple of years ago.

“I’ve been well taken care of,” Irène says. “I was checked over before the birth and given treatment”.

Irene’s aunt says conditions were very different when she gave birth, before the NGO started supporting maternity care in Boda.

“Before, there weren’t beds like these,” Amina Walikete remembers. “They didn’t give us soap or mosquito nets. Now medicine is also free”. 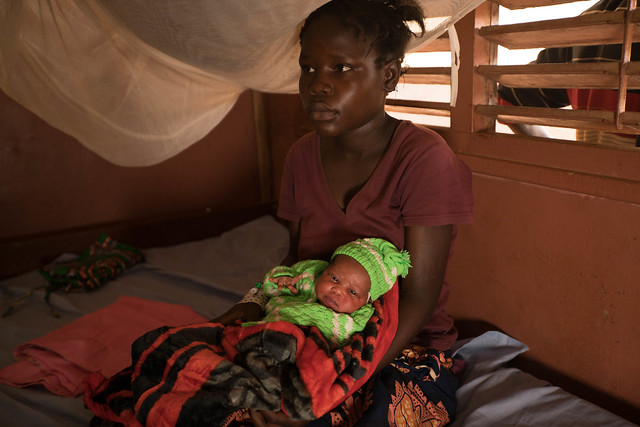 The new mothers don’t stay in hospital long before going home. Bintu lives in what used to be a closed Muslim enclave.

“Before, Muslims killed Christians and Christians killed Muslims,” Bintu says. “And there was no food. Now there is cohesion but poverty still dominates”.

Despite the challenges still facing areas like Boda, regions directly affected by the conflict have little or no access to healthcare.

This is now the priority for the EU Humanitarian Aid office.

“There are huge obstacles for humanitarian aid workers to get access,” says Patrick Wieland of EU Humanitarian Aid. “There are two main problems. One is logistical, as roads are unusable and most locations can only be reached by plane. The other is a matter of security, as we need to negotiate, to mediate, with armed groups in order to get access to people living in camps for displaced people. Over there, there is urgent need for healthcare, food, water, shelter and protection”.

The conflict shows no sign of letting up and helping women like Irène is no easy task. The Central African Republic is the most dangerous country in the world for humanitarian workers after Syria.