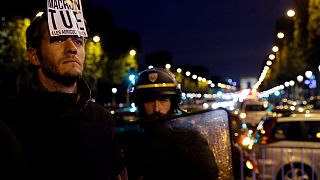 Some 300 farmers gathered on the Champs Elysees at dawn on Friday to protest against the French ecology ministry’s proposal to ban the use of the herbicide glyphosate.

Dressed in black and brandishing posters saying “Macron kills farmers”, they blocked the famous avenue before the morning rush hour by lying on beds of straw strewn across the tarmac.

Members of the FNSEA farmers union said there was no current alternative to the herbicide and that banning it would damage the competitiveness of French farming.

The government has said it plans to oppose renewed authorisation of the chemical by the EU when the subject is up for discussion on October 4.

Farmers protesting on Champs-Elysées against law which will stop them poisoning people (including themselves) with #pesticides. pic.twitter.com/UzTqLEiv9E