It does not really matter where I end up, I don't really care

Bystanders say the mood is one of calm resignation, despite sporadic outbreaks of unrest overnight.

Armed police fanned out across the site as the operation got underway. 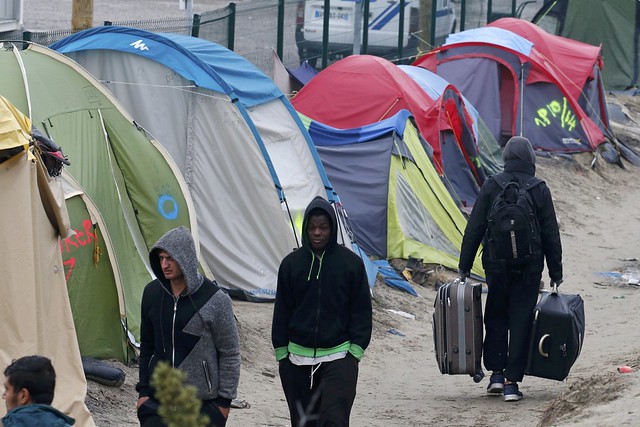 French Interior Ministry spokesperson Pierre-Henry Brandet said the authorities had not needed to use force.

The large police presence, he says, is just for security.

The hundreds of migrants who had volunteered to move on were taken to reception centres by bus.

They were given medical checks and, if they have not already done so, and asked if they want to apply for asylum.

More than 700 had left the shanty-town outside Calais by midday.

Hundreds more are queuing outside an enormous hangar in the squalid shanty town, waiting to be processed before the bulldozers move in.

Officials expect 60 buses to leave the camp on Monday. The government expects the evacuation to take at least a week.

It's a day for goodbyes, as thousands of refugees + migrants leave the Calais 'Jungle' in France. Some have been there for years. pic.twitter.com/cKaa5jDvdt

18 Dramatic Pictures Of The Calais “Jungle” Clear Out https://t.co/LFmK4Yfu0Hpic.twitter.com/mzB9cjInRu

Despite the calm, some aid workers are warning that the trouble overnight shows tensions could rise.

Some migrants burned toilet blocks and threw stones at riot police in protest at the camp’s closure.

Charity workers expect hundreds will try to stay and cautioned that the mood may change later in the week when work begins on razing the camp.

Some think many migrants who are determined to reach Britain will simply scatter into the surrounding countryside and regroup in Calais at a later date.

Why is the Jungle being demolished?

France’s Socialist government says the camp is being closed for humanitarian reasons.

It plans to relocate those sheltering there to 450 accommodation centres across France.

However, France’s far-right National Front is warning the government plan could create mini Calais-style camps across the country.

Who are the people living there?

Many of the migrants are from countries like Afghanistan, Syria and Eritrea.

They want to get to the UK, either to join up with relatives already living there or to seek work.

France is moving 6,000+ migrants as it destroys “The Jungle” camp https://t.co/jpjY55mg8fpic.twitter.com/aWwWeb9DjI

And would this be possible?

Britain bars most of the migrants on the basis of EU rules requiring them to seek asylum in the first member state they set foot in.

The fate of an estimated 1,300 unaccompanied children remains uncertain.

Children with family ties have priority.

Discussions are underway with France over who should take in minors with no connections.

The UK Home Office (Interior Ministry) said on Monday it has reluctantly agreed to suspend the transfer of more children, on the request of the French.

For the moment, children are being moved to converted shipping containers at a site on the edge of the camp.

They are being interviewed by French and British officials.

A touching moment in the women and children's centre of the #Calais Jungle, where our colleagues are working to provide advice and support. pic.twitter.com/MwNMYH7hJP

“I hope this works out. I am alone and I just have to study. It does not really matter where I end up, I don’t really care,” – Amadou Diallo from the West African nation of Guinea.

“It’s cold here. Maybe we’ll be able to leave in a bus later, or next week,” – Abdullah, a teenager from Sudan.

“There is a risk that tensions increase in the week because at some point the bulldozers are going to have to come in,” – Fabrice Durieux from the charity Salam.

“Each time they dismantle part of the camp, it is the same thing. You are going to see them go into hiding and then come back. The battles will continue,” – Christian Salome, president of non-profit group Auberge des Migrants.