Reflect on what you know about Kazakhstan and your list is likely to include oil, Sacha Baron Cohen’s fictional character Borat or the fact the country has a space launch site.

But how many of you had nuclear weapons?

Did you know the country has been dubbed a ‘global leader’ in the fight to rid the world of them?

It is a legacy of its past in the Soviet Union, from which it declared independence in the early 1990s.

Four decades earlier, the Soviets opened a nuclear test site near the city of Semipalatinsk in Kazakhstan.

Some 1.5 million Kazakhs suffered radiation-related cancers and physical deformities as a result of the tests, according to the ATOM Project.

One of them was Karipbek Kuyukov, who was born without arms but went on to become a renowned artist and anti-nuclear activist.

It is perhaps unsurprising that, after declaring independence in 1991, Kazakhstan became one of the first countries to give up nuclear weapons.

Today, it is still a key issue for the country.

In a speech in March, Kazakhstan’s President Nursultan Nazarbayev said the Treaty on the Non-Proliferation of Nuclear weapons was not fulfilling its purpose and that it was ‘just a matter of time’ before they fall into the hands of terrorists.

Today, Kazakhstan is hosting a major international conference on the subject, whose guests include the United Nations.

The two-day get together will coincide with the 25th anniversary of the closure of the Semipalatinsk nuclear test site.

August 29 is also the International Day Against Nuclear Tests. 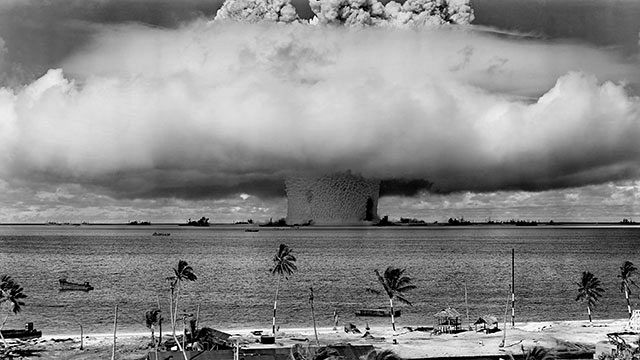