It has been confirmed that 84 people were killed and 200 injured after a large truck was deliberately driven into a crowd of people in the southern French city of Nice.

Paris Prosecutor Francois Molins said there were 10 children and teenagers among the dead, with 52 people in critical condition and 25 on life support.

French President Francois Hollande said the dead include a number of foreigners. Two Americans were named as victims – 51-year-old Sean Copeland and his 11-year-old son Brodie, tourists from Lakeway near Austin, Texas.

Witnesses described how the driver of the lorry sped along a promenade packed with spectators who were leaving a fireworks display marking France’s national holiday.

President Hollande said the killings were a terrorist act as he extended a state of emergency in France for a further three months.

“Although yesterday’s attack has not been claimed, this sort of thing fits in perfectly with calls for murder from such terrorist organisations,” prosecutor Molins said.

Horrific images showed thousands of people fleeing from the scene of the crash and people lying by the side of the road close to the Promenade des Anglais.

After the attack Damien Allemand, a journalist with the Nice Matin newspaper, said that there was “a lot of blood and without doubt many injured”. He said he would never forget the screams.

France has been under a State of National Emergency since the attacks on Paris last November that claimed the lives of 130 people.

The security measures were set to end on 26 July, however President Hollande said on Friday morning that they would continue until October at the earliest.

Italy, Spain, Germany, Britain and Belgium, all of which are neighbours of France, held separate meetings to review their own security.

Brazil’s government said it was looking at its security preparations ahead of the Rio Olympics in light of the attack. They will be staging drills against possible attacks.

London Mayor Sadiq Khan also intends to heighten security in London he told reporters: “I will reassure all Londoners that today we will be reviewing our own safety measures in light of this attack and that I and the Metropolitan Police Commissioner will do everything possible to keep Londoners safe.”

There has been no immediate claim of responsibility for the crash, although ISIL and Al Qaeda have been previously linked to terror attacks using vehicles. ISIL supporters were also reported to have been celebrating the attack on social media. 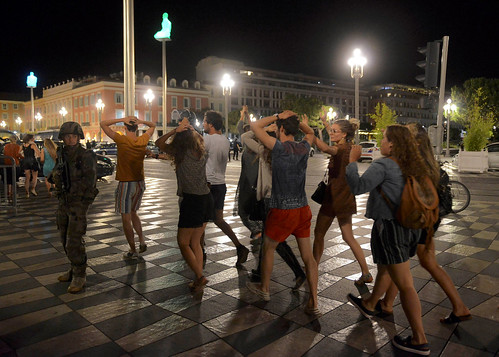 11.30 pm: Local authorities describe the truck collision as an attack. French media report that several gunshots were heard at the scene. A nearby reporter says: “People are running. It’s panic. The lorry mounted the Prom – he drove over everyone.”

11.35 pm: Christian Estrosi, the Mayor of Nice, says the truck attack “seems to have killed dozens of people”. Residents are urged to stay indoors.

11.51 pm: Shocking photographs of bodies strewn across the road in Nice. The Nice-Matin newspaper releases a picture which shows the truck’s windscreen riddled with bullets. Locals are asked to stop posting graphic images online by police.

12.08 am: Reports of a “possible accomplice” to the driver who is on the run.

12.17 am: An official in the Alpes-Maritime, Sebastien Humbert, says: “A truck rammed into the crowd over a long distance, which explains this extremely heavy toll.”

12.20 am: President Francois Hollande returns to Paris for crisis talks.

12.32 am: Nice prosecutor’s office say at least 60 people were killed in the truck attack. An eyewitness says : “We almost died ? (the lorry) zig-zagged – you had no idea where it was going. The lorry ripped through everything ? poles, trees. Some people were hanging on the door and tried to stop it.”

12.41am: The UK Foreign Office tells Britons in the area to follow the instructions of the French authorities.

12.58 am: Mr Brandet confirms that there is no hostage situation, but admits: “I can’t give you information on the man’s motives yet.”

1.00am: First reports that the truck drove two kilometres (1.3 miles) through the crowd while a Downing Street spokesman says: “Our thoughts are with all those affected by this terrible incident on what was a day of national celebration.”

1.19am: Mayor Estrosi tells reporters that the driver seemed to have “completely premeditated behaviour” adding that the lorry was “loaded with arms and grenades”. He calls the attack “the worst moment in Nice’s history”.

1.29 am: Prosecutors say the newly launched investigation into the attack will be taken over by anti-terror officials.

1.45 am: Journalist Damien Allemand decribes the attack: “An enormous white truck came along at crazy speed, turning the wheel to mow down the maximum number of people. I saw bodies flying like bowling pins along its route. Heard noises, cries that I will never forget.”

1.55 am: President Barack Obama condemns “what appears to be a horrific terrorist attack in Nice”.

2.17 am: Officials, update the death toll to 75 people with 15 more in a critical condition. Minutes later, Mayor Estrosi says 77 people were killed in the attack.

3.00 am: The hashtag #RecherchesNice begins to circulate on Twitter for those looking for their loved ones: . A Rihanna concert due to take place in the city on Friday is cancelled along with other concerts scheduled for Saturday.

3.25 am: A police source tells the AFP news agency that identity papers of a 31-year-old French-Tunisian man and Nice resident were found in the lorry.

3.47 am: “Francois Hollande”: calls the attack an act of terror saying “several children” are among the dead. The state of emergency in France which was due to end in three weeks is prolonged by three months. The country is to further its role in Iraq and Syria.

4.24 am: Bernard Cazeneuve, French Interior Minister says 80 people have been killed with 18 more in a critical condition.

7.25 am: French Interior Ministry spokesman Pierre-Henry Brandet says the death toll has risen to 84 dead, with another 18 in critical condition.

8.47 am: Markets react to Nice attacks with France Air and hotel group Accor two of the worst hit companies.

9.15 am: Putin sends his condolences to Francois Hollande

9.55 am: Angela Merkel says: “Our sympathy can by nature never make up for the loss of so many lives but in these days there must be solidarity, the solidarity of all the people in Germany with friends in France, the solidarity of all the countries who are involved in the fight against terrorism. Germany stands by France in the fight against terrorism, together with many, many others and I am convinced that despite the difficulties we will win this fight.”

10.32 am: French Prime Minister Manuel Valls says ‘ We are facing a war that terrorism is bringing to us.’

10.44 am: The European Commision President Jean-Claude Juncker makes the following statement:
“The large and barbaric terrorist act that hit Nice overnight has shocked, saddened and afflicted me profoundly. Once more, so many dreams shattered, so many life plans aborted, so many broken biographies. We are now asking when will this end? We feel united and sympathise with the people of Nice, with the city of Nice which is visited by a lot of Europeans to rest and live their lives. We express our profound sympathy for the people of France and from Mongolia I say long live France and long live its republic which is also ours today.”

10.52 am: U.S. Secretary of State Kerry and Russian Foreign Minister Sergei Lavrov hold a moment of silence for the victims of the Nice attack.

11.44 am A school in Berlin has confirmed that 28 of its students are currently on a trip to Nice and it is not yet known if any of them have been affected by the attack.

11.59 am: About 50 children are reported to have been hospitalised in a pediatric facility in Nice called la fondation Lanval. 18 people are “in a state of absolute emergency”, “fifty minor injuries” and 120 other people are being treated for shock and similar disorders.

12.07 pm: The US State Dept says that two US citizens are among the dead. They have been named as a 52-year-old Father, Sean Copeland and his 10-year-old son Brodie from Austin, Texas who were on holiday in the popular French resort.

12.24 pm: Francois Hollande has arrived in Nice to meet with the emergency services.

12.30 pm: The new British Prime Minister Teresa May says, ‘Britain stands shoulder to shoulder with France.’ Meanwhile the Tour De France race Director Christian Prudhomme says that the race will not be cancelled by, ‘people who want to change our way of living.’