The United Kingdom has voted to leave the European Union, becoming the first European country to do so.

The votes are in and the “Leave” campaign has won the Brexit referendum, with nearly 52 percent in favour of quitting the EU.

David Cameron has announced that he will resign as UK Prime Minister and leave by October. He had urged the country to vote “Remain”. In a news conference this morning he said he would attempt to “steady the ship” over the coming months but that “fresh leadership” was needed.

The UK Independence Party (UKIP) leader Nigel Lafarge declared victory for the Leave campaign saying that June 23 will “go down in our history as our independence day”. He tweeted: “We’ve left behind a failed political union. We can now rejoin the world as an independent, self-governing nation.”

Global markets are reeling after the news and the British pound has slumped to a 31-year low following the Brexit vote. Some economists are already referring to it as Britain’s “Black Friday”, claiming that the UK interest rate is “likely to hit zero”.

England and Wales voted to leave the EU while Northern Ireland and Scotland voted to remain. Scottish First Minister Nicola Sturgeon has come out and said the ‘Brexit’ result means an independence referendum in Scotland is now highly likely.’‘

Sturgeon said it was “democratically unacceptable” that Scotland faced the prospect of being removed from the EU against its will.

He released a statement saying that the Commission will not stall the Leave vote and “to give effect to this decision of the British people as soon as possible, however painful that process may be. Any delay would unnecessarily prolong uncertainty”.

French President Francois Hollande stated that while he respected the British vote to quit, negotiations must be swift.

“The British vote is a tough test for Europe,“ he said in a televised address.

The referendum turnout was nearly 72%, with more than 30 million having voted. Quitting the EU could cost Britain access to the EU’s trade barrier-free single market and mean it must seek new trade accords with countries around the world.

It will take at least two years to sort out the historic exit from the 28-country bloc.

Boris Johnson, former Mayor of London, has said that there should be no rush in Britain leaving the EU. Johnson was a “Leave” campaign supporter. “In voting to leave the EU it’s vital to stress that there’s no need for haste,” he stated Friday morning.

European politicians have reacted to the UK “exit” news with shock. “Please tell me I’m still sleeping and this is all just a bad nightmare!”, former Finnish Prime Minister Alexander Stubb tweeted.

German Chancellor Angela Merkel called it an historic day for Europe and expressed “great regret” about the decision.

Mrs Merkel said that globally we are “living in a world of turmoil” as she urged Europe to remain “calm and composed” following the historic Brexit result:

“Time and time again we are confronted with people that have doubts over the direction that the EU has taken. We have to make sure that people feel that the EU can make a contribution to people’s lives.”

The pound dropped to a 30-year low as markets reacted to the surprise result.

Voter turnout has been the highest in a nationwide UK election since 1997 – almost 72 percent – yet it is ‘Leave’ backers who turned out in higher numbers than ‘Remain’ supporters.

The result leaves the United Kingdom profoundly divided. London, Scotland, Northern Ireland and some major English cities voted in favour of remaining in the EU. However vast swathes of England and Wales voted decisively to leave.

Major cities such as Manchester, Liverpool and Newcastle backed EU membership but this was outweighed by overwhelming support in rural areas and smaller English and Welse towns for a “Brexit”, or leave vote.

Nigel Farage, leader of the UK Independence Party hailed the result as “a victory for ordinary people”. He has campaigned for Britain to leave the EU for more than 20 years, and was a founder of the party whose main goal has now been realised.

Farage called on Prime Minister David Cameron, who backed continued membership of the EU, to quit.

However senior Conservative figures from the “Leave” campaign have written to the prime minister saying they expect him to stay on for the time being.

Cameron said before the referendum that in the event of a “Leave” result he would invoke Article 50 of the Lisbon Treaty, which sets out a two year period for a country to negotiate its withdrawal.

Nicola Sturgeon, first minister of Scotland, said the vote showed Scots wanted to remain in the EU, hinting at a possible breakup of the UK.

The European continent has been waking up to the surprise result. The EU’s chief concerns over Britain’s departure are political but losing its second-largest economy will have a huge economic impact as well.

Right wing parties across the EU seized on the results with Geert Wilders and Marine Le Pen calling for referendums in Netherlands and France. 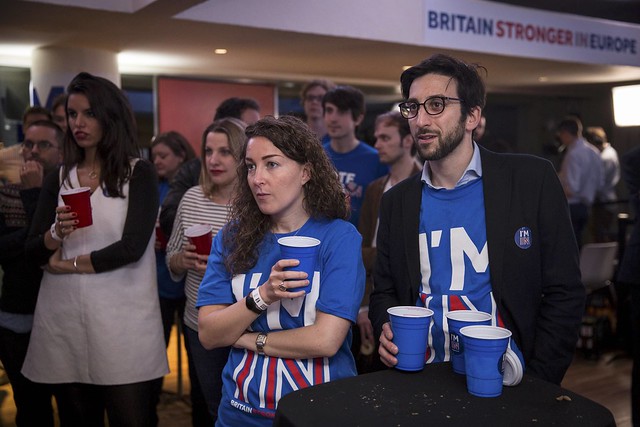