Migrants blocked at the Greek-Macedonian border protest at the closing of the Balkans route that leads to Europe.

Macedonian officials reportedly completely closed the border crossing on Wednesday and Slovenia, Croatia and Serbia imposed tough new restrictions on how many migrants would be allowed through.

There is now a bottleneck of more than 15,000 migrants along the Greek-Macedonian border. 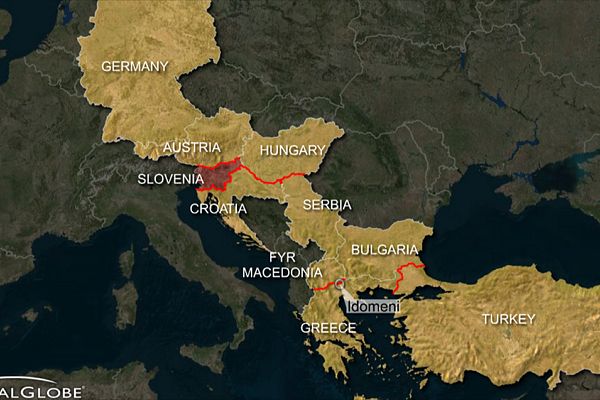 One migrant, Nidal from Syria, told reporters: “I’m sick of this, so tired and bored of this, just waiting for nothing.

There is rising concern about the plight of the migrants at, including hundreds of children, in cold and wet conditions.

Christian Reynders from Doctors Without Borders said: “We fear that the number of children suffering from these conditions, these particular conditions, the humidity, the smoke inhalation, it will cause them severe damage to their lungs.”

And still the migrants keep arriving.

This despite a controversial draft agreement between the EU and Turkey this week aimed at stemming the flow of migrants attempting to reach Europe.

Meet Noor, shes 24 and from #Syria. Back home she was a concert pianist. Here in #idomeni she's stuck in the mud. pic.twitter.com/MV1JluglL4

A child is surrounded by razor-topped wire at the Greek-Macedonian border #Idomenihttps://t.co/72IeSgC10cpic.twitter.com/o61r79J5b5