At 21h20 the barrier rose at the frontier post on Bornholmer strasse. The Berlin Wall was open.
The decision to throw open the border was announced live during a Politburo press conference. At 18.57, Gunter Schabowski made a vague declaration about the GDR adopting new rules for East Germans wanting to move to the West. A few hours later, a huge crowd gathered at Berlin’s most northern checkpoint at Bornholme Strasse. 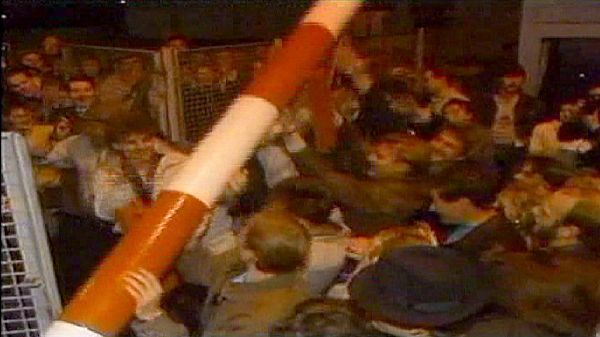 Some 20,000 people passed unchecked over the railway bridges within an hour. But the flood gates were yet to open at the city’s other checkpoints as thousands of east Berliners were still having their passports stamped by overworked border guards. Maria Schuler was one of many who dared to make the crossing 20 years ago. She said: “I lived in this area so long, over 20 years, and I was albe to see this bridge, but I couldn’t go up onto it. I wanted finally be able to stand there. And I stood there and drank champagne and cried”.

In the following days, thousands more east Berliners found the courage to make the crossing. Their fear forgotten, some made impromptu passages like here at Bernauer Strasse. Riccardo Ehrman was the journalist who questioned the Politburo spokesman on the night of the ninth. “I could not even, with the greatest flight of fantasy, imagine that my question could bring out such an answer. The answer was earth shattering because it meant that the whole Communist empire came down,” he said. Berlin was the scene of unprecedented outbursts of joy. Across the city, people from both sides of the border celebrated. But for some East Germans the change and fear of the future was terrifying. Marie Schüler said: “People from Osloer Strasse, in the West, came towards me with champagne. They offered me a glass and we drank it together. On the other hand it was clear that in taking that step, the world I had lived in, and I don’t want to make a judgement about it, that is now gone.” Just a year after the Berlin Wall’s collapse, history stepped up another gear, when the GDR disappeared and Germany sealed its reunification.
TOP TAGS
UNITED KINGDOM UKRAINE WAR FRANCE RUSSIA-UKRAINE INVASION TECHNOLOGY
My Europe World Business Sport Green Next Travel Culture Video All Programmes Here we grow: Spain Algeria Tomorrow Croatia 360 My Tokyo Coronavirus Podcasts Climate InClassica Destination Dubai Angola 360 Depth of Field The New Uzbekistan Kerala Tourism Digital Garden City Nation Under the hood Discover Bulgaria Expo 2020 Ron Barceló