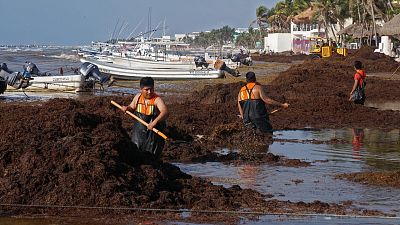 Millions of tons of brown seaweed has washed up along Mexico's beaches this summer and it’s putting the country’s post-COVID travel boom at risk.

It gives a brown tint to crystal clear waters and emits a sewage-like stench when it washes ashore, according to the University of South Florida.

There were 24.2 million tons recorded in the last month in the Caribbean region, up from 18.8 million tons in May. Near record amounts of this seaweed have been smothering coastlines in the region from Puerto Rico to Barbados.

In Mexico, the boom in sargassum poses a "significant threat" to the country's post-pandemic tourism recovery, analysts from bank BBVA warn. Particularly in Quintana Roo state, home to destinations like Cancun, Tulum and Playa del Carmen.

24.2 million tons of seaweed were recorded in the last month in the Caribbean region.

Mexico's Navy and local workers have been drafted in to remove it from the water and sand.

"The sargassum is not a problem that can be solved, but must constantly be addressed, mainly in the summer months," BBVA said on Monday.

Mexico's GDP from tourism took a 25 per cent hit in real terms in 2020 due to the pandemic, even though the country never closed its borders. In 2021, however, the sector rebounded to near pre-pandemic levels - but the upward trajectory is in danger unless the seaweed is controlled.

Researchers blame multiple factors for the increased levels of sargassum - including climate change, human sewage, fertilisers being washed from Brazil's rivers into the Atlantic Ocean and dust blowing west from Africa's Sahara Desert.

Is seaweed a problem anywhere else?

The sargassum occurs naturally and usually appears in the region in March. As the waters warm through summer, it creates the perfect conditions for propagation meaning levels typically increase.

But, since 2011, seaweed in Mexico and across the Caribbean has exploded for reasons scientists do not yet fully understand.

Belize has recently seen an uptick in sargassum seaweed polluting its beaches too. The locations where high concentrations are particularly bad are Hopkins and Placencia in the south of the country.

We spoke to Laura McMullen, a sustainability consultant in the UK, who was on holiday in Caye Caulker in Belize in May 2022.

“There was this strange seaweed washing up all over the Mesoamerican reef,” she tells Euronews Green.

“There was some of it last year but [locals have] never seen it this bad. It’s washing up on all the islands. It then decomposes and it has a really bad smell. They’re trying to get rid of it but it’s growing so much more because of climate change - the temperatures are much higher and the seas are much warmer.

How are local businesses tackling the seaweed problem?

Hotel chains and restaurants along the beaches in Mexico and Belize have created task forces of dozens of island workers to try and deal with it.

They try to keep their areas clean for customers, but public beaches are overwhelmed by the expansive seaweed carpets.

Belize’s San Pedro Town Council announced in March that it would spend around $20,000 (€19,454) every year to rid the beaches of seaweed.

Other beaches in the region have invested in a range of measures including floating barriers, giant pumps and nets that catch the sargassum before it reaches the shore. It can then be collected by boats and some countries like Jamaica are even looking into ways it can be processed and used.

The government in the Dominican Republic invested in a barrier to block the seaweed from reaching the beach in 2020. It now stretches 12.7 kilometres along the Bavaro beachfront but this is just 40 per cent of its total length.

If climate change and pollution mean this seaweed problem is the new normal, the Caribbean will have to invest in more ways to keep its beaches clean.