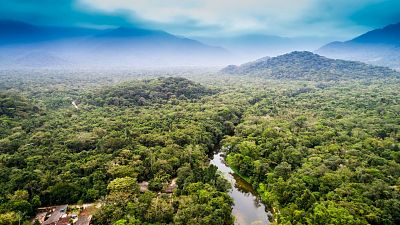 Standing on top of Caracol’s colossal Maya temple and Belize’s greatest ancient discovery to date, I feel grateful for the views of nature that surround me.

I’m situated approximately 40 kilometres south of Xunantunich and the town of San Ignacio Cayo, and 15 kilometres away from the Macal River. My expectations have been met, and the journey worth it.

But my expedition has only just begun. I am now on my way to Chiquibul national park to tour the Maya ruins - a truly memorable experience.

Although the 52 mile drive into the south-western region of Belize, over unpaved roads and bumpy red sand dirt tracks, takes most of the morning, it does nothing to dampen our excitement.

I for one love venturing into remote parts of the world and the drive turns into quite an adventure as we look out for a shy jaguar. So aloof in fact, that the driver who had lived in the area all his life had never seen one.

By the time we arrive at a security checkpoint, our driver explains that the temples are shaped like pyramids. The Maya believed that the gods lived within them. The cave systems were considered entrances to the underworld, and offerings were made at their mouths, on the top of the temples.

Unfortunately, security is unable to accompany us to Chiquibul which is the largest national park in Belize. Their vehicle had broken down, but our driver and tour guide from Yute Expeditions explains that he is confident he can get us to the Maya ruins at Caracol unharmed.

“Bandits haven’t been a problem here recently. You’re no more likely to get kidnapped here than anywhere else in Latin America,” he says.

We look at each other just to confirm that we’d heard what he’d said correctly. I spend most of the rest of the journey trying not to imagine being kidnapped at gunpoint for ransom. The UK’s position on payment is noticeably clear, they do not pay. Nor do I have a family wealthy enough to scrape together a few million US dollars.

I spend most of the rest of the journey trying not to imagine being kidnapped at gunpoint for ransom.

We pull into what I presume is some sort of parking area with a calming sense of relief and follow our guide down a track surrounded by Belize's national mahogany trees - further into Chiquibul.

I was expecting a long hike, but as if by magic the trees faded away and the site in front of me is unexpected. There aren't any tour groups, ticket touts trying to sell tickets for other attractions, a gift shop selling tacky souvenirs, or even a cafe.

At the time of arrival, the only other human company we have are two armed patrol guards standing on top of opposite temples.

As I look up at the colossal complex, the challenge of going so far off the beaten path suddenly becomes worth it. Our guide explains that the 3,000 year-old archaeological reserve was once one of the most important regional political centres of the Maya Lowlands, but its long history is full of gaps.

We know it was rediscovered in 1937 by a logger named Rosa Mai, and to date, not much of it has been excavated. Not only is it the largest Maya city at 77 square kilometres excavated so far in Belize, but it’s also thought to be larger than the well-known Tikal ruins in neighbouring Guatemala.

We arrive at the foot of the main attraction, the 140 feet high Kaana, and stare in awe at the colossal staircase that lies before us.

By now it is midday, and the power of the sun and humidity is engulfing us, so we decide to climb the knee-high stairs at a leisurely pace, while we casually chat about what it must have been like here in 600 BC. A time when blood ran down the steps and dismembered bodies of the 100,000 people living in the city were thrown from the top by the ancient kings living in Caana.

Towards the end of the rule, the kings ran out of city dwellers to sacrifice and even went so far as to sacrifice their children. But they hadn’t thought of that by killing everyone they had no one left to hunt for them.

The views at the top make the epic climb worthwhile. We are surrounded by the natural beauty of Chiquibul and can see Guatemala just 35 miles from the site, in the distance. It is extremely hot on the summit, so we pose for those all-important Instagram shots and sit down and talk for a while before deciding to explore the other temples and the rest of the Maya site.

Secrets for the future

Finally, we wander along the pathways that once connected these mighty structures, looking at Maya stelae statues and face carvings, stone slabs erected by the ancient world as monuments, altars, more than 250 burial sites, and other everyday items that had been stored away by the Maya for future use and no doubt forgotten.

As our tour is nearing its end, I spot holes in the ground that I am keen to explore. I am about to stick my finger into one of the holes when our guide decides to take over and instead of using his finger, uses a small bunch of weeds. A red-rumped tarantula grabs hold of the invading foliage and climbs its way up to the surface!

It's fair to say that tarantulas don’t have the best reputation, but for spiders, they are quite timid and shy, unless you go putting something into their holes of course.

When I think about the future of Caracol, it has so much potential to evolve. Excavating Caracol is an ongoing project, but we know that many temples and shrines lie just below the soil, and with them lie secrets that will help us gain a better understanding of the Maya in years to come.