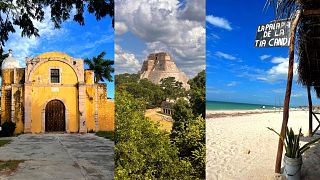 Mexico is the seventh-most visited country in the world. Every year, more than 40 million people head to the country for sun, sea, culture - and great food.

Throughout the pandemic, Mexico has consistently had some of the most relaxed travel restrictions.

But that doesn’t mean Mexico hasn’t been taking COVID-19 extremely seriously. More so than most European places I’ve been to recently, the country has some of the most rigorous hygiene practices everywhere you go - helping keep infection rates as low as possible.

So, if you want a restriction-free holiday, somewhere that’s hot on hygiene - look no further than Mexico’s beautiful state of Yucatán.

If you want culture…

The Maya population across the wider Yucatán Peninsula, which includes the states of Yucatán, Campeche and Quintana Roo, is the largest concentration of Indigenous peoples in Mexico.

This means Yucatán can in some ways feel like a completely separate country from the rest of Mexico, as everything from the food to the buildings to the language is shaped by Maya traditions. But we’ll come onto food and architecture in a moment.

One of the best things to do is a walking tour of Mérida, Yucatán’s largest city. It’s a stunning, bustling metropolis with so much to take in.

I spent an evening on a tour, beginning with a walk down Paseo de Montejo - Yucatán’s answer to the Champs-Élysées - a historic boulevard, lined with grand mansions and excellent cafes.

We started at the Monumento a la Patria (Monument to the Fatherland), sculpted by Colombian artist Rómulo Rozo, before wandering down the wide avenue into the centre of the city.

I was so struck by the architecture and how beautiful Mérida was, I took myself off for my own walking tour the next day - exploring every nook and cranny I could find.

Highlights for me were the Teatro Armando Manzanero, a stunning art-deco performance space in the city centre; the amazing Plaza Principal, the main square surrounded by little museums and amazing bookstores; and the many galleries and workshop spaces where Maya craftspeople and artisans sell their goods.

Outside of Mérida, there are a wealth of beautiful places worth visiting for cultural experiences. From Valladolid to Izamal, there are four ‘Pueblos Mágicos’ (literally: Magical Towns) that are part of a nationwide initiative to highlight towns and cities rich with natural beauty, cultural relevance, or traditional importance.

We can’t mention Yucatán without talking about the Mayan ruins, because that’s one of the main reasons people come to the region.

First and foremost, there’s Chichen Itza - a UNESCO World Heritage Site and one of the ‘New Seven Wonders of the World.’ I went here on my first full day in Mexico, and it absolutely did not disappoint.

Some things are world-famous for a reason, and Chichen Itza is astounding.

For me, the only downside was the sheer number of visitors. I’d still recommend going - even if you’re crowd-averse - because it’s a big open space that never feels too claustrophobic. But I’d also strongly suggest visiting a range of sites, just so you get a fuller experience.

I also went to Mayapan (or Màayapáan in modern Maya). My group of ten were virtually the only visitors on the day we went, despite the site being so close to Mérida.

Mayapan was actually once the political and cultural capital of the Maya people for over 200 years, until roughly the 1440s. There are over 4,000 structures within the site, with more archaeological work and excavations continuing to this day.

Because it’s relatively quiet, tourists are still allowed to climb the temples (no longer possible at more popular places like Chichen Itza) - offering an astounding view of the surrounding rainforest.

But my favourite Mayan site by far was Uxmal. If you only have time to visit one place while in Yucatán, I’d strongly suggest you consider Uxmal. Chichen Itza is definitely worth the hype, but Uxmal was just extraordinary.

There is, of course, the very famous Pyramid of the Magician - which is extremely impressive - but there’s also the stunning Governor’s Palace, smaller pyramids, enormous courts, monuments and temples.

What makes Uxmal so brilliant is the way the terrain was used to create levels, which means it offers some of the best views in the region. Make sure you take the time to look out over the buildings into the rainforest beyond.

I am a total water baby. I judge every place I visit on the quality of its oceans, lakes and rivers and how much time I get to spend swimming, floating and paddling in them.

So going to Yucatán - home to an estimated over 6,000 cenotes - was an absolute dream come true.

In case you’re not familiar with cenotes, they are natural pits or sinkholes that fill with groundwater. Some need to be excavated, while others are easier to access - and many still haven’t been discovered.

Yucatán has no freshwater sources, which is why cenotes are so important. For thousands of years, these were literally the only source of water for entire civilisations in the region. As such, many cenotes have spiritual or sacred meaning to Maya people and are therefore closed to swimmers.

But the vast majority are completely accessible for swimmers, although varying greatly in size, shape and style.

Some, like Cenote Lol-Ha in the village of Yaxunah, feel virtually untouched and so peaceful you lose yourself in the natural beauty of it all. Then there are smaller places, like the entirely underground Cenote San Ignacio in Chocholá, which are just as beautiful, but have become part of a more formal hotel complex.

The grandest cenote I visited was the Cenotes Hacienda Muyuché resort. I didn’t think I’d be as excited by somewhere more polished, without the rugged appeal of places like Lol-Ha - but I was completely blown away.

As well as a fascinating tour of the Hacienda, and insight into the complex and often tragic history of haciendas in the region, we spent an hour on a guided swim through the cenotes.

Starting in the extraordinary half-open Cenote Carlota, you swim through a beautiful canal, before arriving at the entrance to Cenote Azul Maya. This spot was only discovered relatively recently, but is considered sacred to Maya people - which is why guests are asked to be silent inside.

It’s hard to do justice to this particular cenote, but after ducking under 1.5 million-year-old stalactites to get through the small entrance - I floated into the most magnificent cavernous space, almost cathedral-like in both size and significance. This was undoubtedly one of the most remarkable places I’ve ever visited in my life.

Away from cenotes, Yucatán is also blessed with gorgeous beaches. I swam lengths on the virtually empty beach in Celestún while waiting for my food to arrive (some of the freshest ceviche I’ve ever eaten), and was in my absolute element.

For more developed beach areas, there’s the popular resort town of Progreso to the north of Mérida too, while Cancún and Playa del Carmen, though technically in the state of Quintana Roo, are on the east coast of the Yucatán Peninsula.

If you want to feel safe…

One of the first questions people asked when they found out I was going to Mexico was “how safe is it?”

Though safety is a relative term - and one often used to unfairly label countries in the Global South - in practical terms, Yucatán is one of the safest parts not only of Mexico, but all of North America.

Mérida specifically is consistently ranked the second safest city in North America, with only Quebec City outranking it. That means Mérida is considered to be safer than any city in the USA - and having been there, I completely agree.

Although I am naturally wary, I also love travelling alone and spending time exploring new places. I walked the length and breadth of Mérida twice, ducking into random alleyways to see a beautiful building, and getting lost outside the usual tourist spots late at night.

Though I’ll never advocate risk-taking, I can't think of a single town or city where I’ve felt more comfortable alone.

This extends to the wider Yucatán state too. My wonderful tour guide Fausto explained that a lot of this stems from the influence of Mayan culture, where values like conviviality and social responsibility have always been emphasised.

I’m going to caveat this section by saying - I don’t eat pork.

But it turns out, Yucatán loves pork. I mean really, really loves it. To the point where when I visited a traditional Mayan restaurant, I couldn’t find any main meals without pork.

Feedback from others in my group suggests that the cochinita pibil is absolutely delicious, but alas, I can’t vouch for that personally.

There is a wealth of amazing food in Yucatán though. . So if you’re a fellow non-pork eater, a vegetarian or vegan you certainly won’t starve. You might just need to do a bit of forward planning if you’re going to a more remote spot.

My favourite meal was in the high-end Picheta in the centre of Mérida. The resident executive chef, Rodolfo Barrientos, put together a special tasting menu for us that was absolutely exquisite. There’s also great fine dining available at the many luxury hacienda resorts dotted across the state, like Hacienda Xcanatun where I had the most extraordinary risotto.

For cheaper eats and street food, Yucatán has plenty to offer too. I’d recommend grabbing a marquesita from a vendor in Mérida if you have the chance. These strange crispy crepes are stuffed with cajeta (a sweet dulce de leche type caramel) and edam cheese.

If you want variety…

Mexico is enormous, varied and diverse. I feel my week in Yucatán barely scratched the surface of the peninsula, let alone the rest of the country.

There is so much to do in the region, for every type of traveller: families, couples, adventurers, history buffs, foodies - you name it.

I’d struggle to name anywhere else I’ve been that offers such diversity, both in terms of activities and scenery.

So if you want to visit Mexico for the first time, I can’t think of a better place to start.