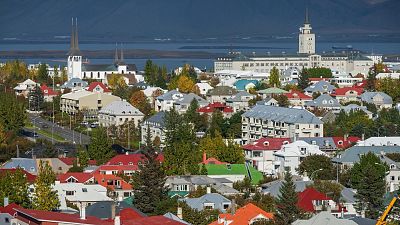 As a ferocious heatwave engulfs much of Europe this week, countries are roasting in record-high temperatures that at best make life extremely uncomfortable, and at worst can cause fatalities.

So where could you go to beat the heat? The short answer is to head north - the further north the better - and islands benefit from cooler sea breezes too.

Euronews found some of Europe's coolest temperatures, and even a couple of places still in single digits:

"It's very pleasant without being too hot," said Bob Kerr, the communications officer at Shetland Islands Council.

"We don't often get 20 degrees here, it's pleasant and sunny but we're expecting some rain later today. We don't get too hot in summer, and we don't get too cold in winter," he told Euronews.

As Britain smashed its high-temperature record on Tuesday, with the mercury hitting +39.1°C in the south of England, the local tourist board Promote Shetland is marketing the islands as "the coolest place in the UK."

The North Atlantic Island of Iceland is living up to its chilly name this week.

On Tuesday morning temperatures in the capital, Reykjavik, hovered around +11°C while in the country's second largest town Akureyri local residents enjoyed temperatures in the single digits at +8°C in the morning, rising just a few more degrees in the afternoon.

"It's cloudy with a little rain right now," the Akureyri tourist office tells Euronews Travel, "although often the weather is better than now, with sunshine and 18 degrees."

July is statistically the warmest month of the year in the north of Iceland, with the average temperature in Akureyri a pleasant +15°C and just 3.7mm of rain.

"Icelanders like to talk about the weather. Understandably, because it can change over and over again during the day," the tourist office wrote on their website.

"Generally it is believed that the weather is always good in Akureyri, although it is far from being based on scientific evidence."

Heading north of the Arctic Circle in Lapland you're sure to find far cooler temperatures than across much of the rest of Europe.

On Tuesday Jokkmokk in Sweden was enjoying +13°C with some light rain, while Tromsø in Norway was just a degree warmer.

"Out the window it's cloudy and it's 14 degrees centigrade," said Zillah Bugeja from Visit Tromsø**.**

"We've had people who were stuck here because there was an airline strike and they were quite happy to be stuck here and not go home to temps of 38 degrees," she told Euronews.

"The temperature is going up to 21 degrees tomorrow and we consider that quite warm!"