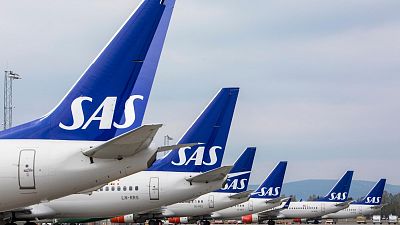 Scandinavian airline SAS and the unions representing its pilots announced today that they have reached an agreement, ending a two-week strike that has cost the troubled company €9-12 million per day.

"After 15 days of strike action, SAS and the SAS Scandinavia pilot unions have reached an agreement. The parties have agreed on new 5.5-year collective bargaining agreements and SAS Scandinavia flights will resume their regular traffic schedule as soon as possible," SAS said in a statement, following negotiations that lasted all day Monday and ended Tuesday morning.

"SAS pilots have taken the responsibility to sign a new agreement with SAS and the strike will end," the Swedish Airline Pilots Association (SPF) said in a separate statement.

I am pleased to announce that we have now reached an agreement with the four pilot unions for SAS Scandinavia and that the strike is over," said SPF managing director Anko van der Werff.

"Finally, we can resume normal operations and transport our customers on their long-awaited summer holidays. I deeply regret that so many of our passengers have been affected by this strike," van der Werff added.

How long were SAS pilots on strike?

Nearly 1,000 pilots went on strike on 4 July this year. They were protesting against pay cuts demanded by management as part of a restructuring plan to ensure the company's survival, and against the company's decision not to rehire pilots laid off during the COVID pandemic.

According to the SPF, 450 pilots will be rehired under the new agreement.

The day after the first day of the strike, SAS announced that it was filing for Chapter 11 bankruptcy protection in the US.

Last week, the company's CEO Anko van der Werff warned that the prolonged strike threatened "the success of the Chapter 11 process and ultimately the survival of the company".

How much does a strike cost an airline?

Going into the tenth day of strike action, SAS said it had already cost between SEK 1 billion and SEK 1.3 billion (€94 million to €123 million), with more than 2,500 flights cancelled.

The strike has also had a "severe impact on the possibilities of success" of SAS Forward, the savings and restructuring plan launched by the company in February, Anko van der Werff said.

"We are now continuing the important work of taking forward our SAS Forward transformation plan and building a strong and competitive SAS for generations to come," van der Werff said Tuesday.

The summer is shaping up to be a difficult one for Europe's airlines and airports, with staff shortages affecting air traffic.

After numerous job cuts linked to COVID airlines and airports are struggling to recruit new staff in many countries.

SAS, which employs nearly 7,000 people, mainly in the three Scandinavian countries (Sweden, Norway and Denmark), is also seeking to complete a capital increase plan of around €1 billion to raise fresh money.