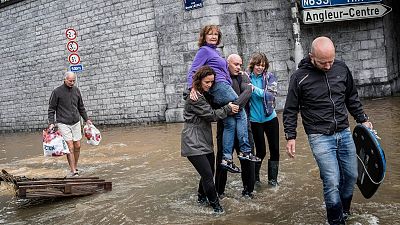 A woman is carried through a flooded street in Belgium, scenes which are likely to be more frequent in the future due to climate change   -   Copyright  AP Photo/Valentin Bianchi
By Tim Gallagher  •  Updated: 25/05/2022

200 million people could be displaced by climate change-related storms in the coming 20 years, according to new research.

International disaster relief charity ShelterBox has calculated that, based on an average of over 10.9 million displaced people over the last five years, hundreds of millions more could be displaced in the next two decades.

And that means 40 million homes will be destroyed too.

The estimate is conservative given the stark warnings made by the Intergovernmental Panel on Climate Change’s (IPCC) about increased storm patterns due to global heating.

“It’s very dramatic…seeing the real effects of what climate change can do to individuals and families,” says program manager at Shelterbox, Henry Thompson.

“When someone is displaced they’ve lost everything in their homes, all the items within their homes,” explains the disaster relief worker, who recently returned from aid work in the aftermath of Typhoon Rai in the Philippines.

“The more we can combat climate change the less we’ll need to support those families that are being impacted right now.”

Will Europeans be displaced by extreme weather?

As climate change brings an end to a liveable earth, extreme weather which Europeans think of as being confined to the tropics will arrive closer to home.

Over 200 people were killed in floods last year when record rainfall devastated Belgium, Germany and other central European countries. The deluges destroyed entire villages whose former residents are still picking up the pieces of their former lives.

Professor Abdullah Kahraman is a senior researcher at the University of Newcastle in the UK and has been a resident at the British Met Office for three years. Using sophisticated simulations he predicts that the flash floods seen last summer are likely to increase in the future if climate change isn’t stopped in its tracks

“The movement of the storm system is very important in terms of flash flooding,” says Kahraman.

“Experiencing high precipitation amounts for only a few minutes doesn’t result in large amounts of flooding, but for a long time in one location over a city? There is more likely to be more precipitation than the drainage of the city can take.”

Although the simulation is for a worst case scenario, the findings show that slow-moving rainstorms could be 14 times more frequent by the end of the century.

Kahraman says that large precipitation events are considered rare occurrences and mostly happen in the Mediterranean. However that region now plays host to tropical storms such as the one seen in Sicily last year, and extreme storms are increasing elsewhere.

“Right now Europe isn’t experiencing and doesn’t know how such a thing could happen.

“This will spread to the whole of continental Europe and the British isles.

“France, the Balkans, even Scandinavia…the whole continent is vulnerable to this.”

Over the weekend a typhoon hit Germany causing destruction and injury in its wake. The question is, how many Europeans will be displaced as weather patterns change on the continent?