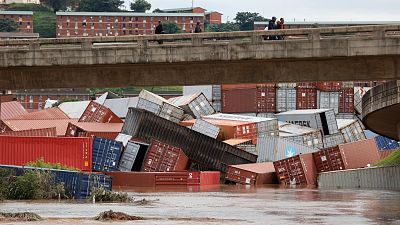 Residents of Umlazi township stand over a bridge and watch containers that fell over at a container storage facility following heavy rains and winds in Durban.   -   Copyright  PHILL MAGAKOE/AFP
By Phill Magakoe & Linda Givetash AFP  •  Updated: 20/04/2022

South Africa's worst-ever floods have killed more than 300 people, according to new reports on Wednesday night.

Heavy rains on the east coast devastated thousands of homes, roads and bridges in Durban, a major African port and epicentre of the disaster.

"The death toll from the floods in Kwazulu-Natal (KZN, east) stands at 306," a spokesman for the disaster management office told AFP. A previous report put the death toll at 259.

The heaviest rainfall recorded in more than 60 years in the region has left behind a desolate landscape.

"Bridges have collapsed. Roads collapsed. People have died. Our people are injured. This is a disaster of enormous proportions," said President Cyril Ramaphosa, who visited the bereaved families.

In a suburb of Durban, the head of state listened to a father talk about water rising in the middle of the night, the electricity being cut off and his four children asleep in another room whom he could not save.

Some southern African countries are regularly plagued by deadly storms during the November to April cyclone season. But South Africa is generally spared.

In parts of the metropolitan area where more than 3.5 million people live, landslides have left giant gaps in the ground. Houses clinging to the hillside are miraculously holding on to the edge of precipices created by the mudslides.

Rescue workers say the floods are 'a nightmare'

Local authorities said they are facing an influx of bodies in morgues. The search has been going on for several days by rescue workers who describe "a nightmare". Dozens of people are still missing and the army has been mobilized.

The rain continued to fall Wednesday afternoon and a flood alert was issued in the neighbouring Eastern Cape province.

In 2019, floods in the region had already killed 70 people and devastated several villages along the Indian Ocean. And in 1995, 140 people had been killed in bad weather, according to data recorded by AFP.

Nokuthula Ntantiso, a township resident, still has a roof over her head but she wonders how long it will last.

"Last night, I didn't sleep a wink, thinking that the house could collapse at any moment," says the call centre worker. The next morning, the 31-year-old went to work but had to turn back because a bridge had collapsed.

The main roads are submerged beneath the murky water. Signs and traffic lights stick out of a thick layer of mud that only bulldozers have been able to start clearing.

A portion of the road has been washed away, leaving a gash as wide as a truck and huge metal containers were tossed onto the highway. There have also been reports of looting.

On the popular beaches of Durban, mountains of branches, bottles and garbage were washed up and port activity has been suspended in the city.

The impact of 'worsening climate change'

Most classrooms remained empty with at least 140 schools affected, according to local authorities.

"In 48 hours, more than 450mm of water has fallen in some areas," Dipuo Tawana, a forecaster at the National Meteorological Institute, told AFP. Specialists compared the level of rainfall to that "normally associated with cyclones."

The forecasters warned of persistent rains and the risk of localized flooding in the coming days. The region has already seen massive destruction in July during an unprecedented wave of rioting and looting.

However, during a moment of respite during the day, residents began to clear the area.

The destruction is undoubtedly linked to "worsening climate change" with extreme events likely to recur, warned Mary Galvin, professor of development studies at the University of Johannesburg.