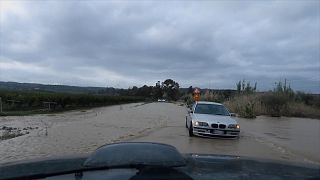 The body of a 67-year-old man who was carried away by a flooded river was found in an orange grove in Sicily on Monday.

Rescuers are still searching for the man's wife.

Firefighters say the couple's car was dragged two kilometers in two meters of water which had been caused by torrential rains.

The downpour in southern Italy has flooded roads, blocking cars and trapping people in their homes.

Planes flying to the Sicilian airports of Catania and Palermo have been diverted to other airports, according to the Italian news agency ANSA.

Firefighters have conducted hundreds of rescue operations in Sicily, many to help people trapped in homes and cars.

Schools were closed on Monday in Sicily.