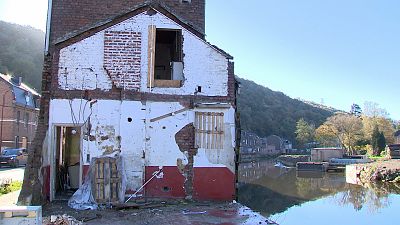 It’s now three months since Bernadette Leemans and her neighbours had to up sticks and move away because of dangerous floods here in Chaudfontaine in South East Belgium. But for the mother of two, it’s as if it were yesterday.

“Water started coming from the road over there so we decided to put sacks of sand in front of our doors,” she says. “All the neighbours got together but little by little, the water started flooding the parking lot so we lifted the rubbish bins up a level. Up till then, it was actually quite fun”.

But by late afternoon, Bernadette was gathering her personal belongings at speed. Locals, who’d never witnessed the like before, were shocked.

Studies say the severe flooding was made more likely by climate change - and scientists warn events like this will occur more frequently in the future.

Bernadette has been working on climate change issues for 17 years. Now she’s writing a book to share her story and raise the alarm.

“I feel like I am a ‘climate refugee’ because of climate change”, she says. “I had to leave my home.”

In the second half of the century, we might face a major migration crisis because of climate change.

Although the term ‘climate refugee’ has not yet been defined legally, research by German Professor Frank Bierman suggests unless policies change, climate change could cause the largest refugee crisis in human history – with large flows from Asia and Africa towards Europe.

“In the second half of the century, we might face a major migration crisis because of climate change,” says the author of Climate Refugees. “Depending, and that is very important to add, depending, on the climate policies being implemented and developed today. So, it is not too late. I am not an alarmist, I am not totally negative. There is a chance to stop climate change. There is a chance to work out of this crisis. But if it is not happening, climate migration might become a problem.”

That would require a show of ambition from world leaders at COP26 in Glasgow.

“COP26 is just one of the elements and I think it is important that the politicians implement things as they have power…but they are not the only ones – we all need to act together,” says Bernadette.

Whatever happens at COP26, this village has been decimated - and climate change is a possible cause.