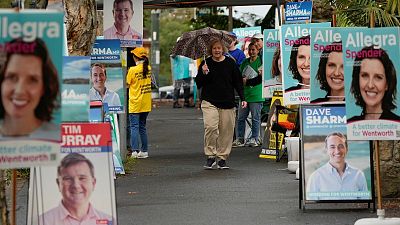 In just two days, Australian voters go to the polls to vote for their next government - but will they prioritise climate leadership or their economic reliance on fossil fuels?

Australia is one of the world’s worst offenders for carbon emissions per capita. The country is responsible for 1 per cent of greenhouse gases, a figure that rises to 3.6 per cent with their fossil fuel exports factored in. For a nation with only 0.3 per cent of the world’s population, this is a massive amount; nearly three times the average for other G20 countries.

The consequences of their carbon-intensive industries are right on their door step., This year ‘once in a generation’ (hopefully) floods occurred in eastern Australia, and who could forget the ‘black summer’ of 2020 which saw wildfires ravage the countryside and darken the skies of Sydney.

Given the disjuncture between the government’s approach to emissions and the very real dangers faced by the Australian population, it’s no surprise that voters are concerned.

A majority in parliament’s lower house is needed by one party - or a coalition - to pass legislation. Current Prime Minister Scott Morrison’s Liberal-National coalition has been in power for a decade, with the main opposition party, Labor, vying for control.

Meanwhile, the Green party have seen an uptick in popularity due to increased concern over global heating, and a rag tag group of high-profile challengers to the Liberals, called the Teal Independents, are hoping to make a dent in Morisson’s majority.

However with many swing seats in coal mining areas and a strong fossil fuel lobby, can the country vote in a government that’s progressive on climate? Let’s take a look at what’s at stake.

Morrison came under considerable international pressure for his perceived lack of enthusiasm for COP26 in Glasgow last year. It was only shortly before the major climate conference that Morrison finally announced a commitment to netzero by 2050. He has also drawn ire for the goal of only a 26 - 27 per cent cut by 2030, which would equal half that of the UK and US commitments.

Meanwhile the Labor party is aiming for a 43 per cent cut in the same time frame, contrasting themselves with Morrison’s coalition in taking climate change more seriously. Labor claims this will be consistent with 1.6C - 1.7C increases in temperatures as set out by the Intergovernmental Panel on Climate Change (IPCC).

The Greens are unsurprisingly pushing the envelope further and promising a 75% cut in emissions by the end of the decade, with the Teal Independents goal set as 50 - 60%.

Meanwhile the far-right One Nation party are proud climate sceptics and want an end to emissions targets.

It’s widely accepted that high-emitting countries like Australia and those in Europe and North America must cut their emissions by two thirds before 2030 in order to limit global temperature increases to 1.5C above preindustrial levels.

A shift to netzero means a shift away from power stations and coal, difficult given Australia’s reliance on the dirtiest fossil fuel for 70 per cent of its electricity as well as exports.

However, as President Biden was keen to point out to the American public in 2020, the green transition can mean jobs, jobs, jobs! A sentiment Australian politicians have taken forward as they try to woo swing voters.

In Monash, an agricultural area east of Melbourne, candidates are vying to put forward plans to both slash emissions and stimulate the regional economy.

Labor is focused on establishing a hotbed of hydrogen industry in the area while the Liberal party have highlighted a €1.3 billion spending commitment to renewable energy. Meanwhile an independent candidate has said they will provide investment to boost wind, hydro, and solar power.

Both the Liberal and Labor emissions targets rely heavily on technological solutions like carbon capture and hydrogen, rather than cutting emissions at their source.

According to the Lowy Institute 55 per cent of Australians want the government’s main priority on energy policy to be reducing carbon emissions. However, the country’s reliance on coal means that 30,000 jobs stand to be lost by eliminating fossil fuels, according to the Centre for Policy Development, creating a difficult bind for politicians.

Neither Labor nor the Liberal-National coalition have pledged to close coal mines, pointing rather to a policy of naturally shifting away from coal as the market demand decreases. Meanwhile, 114 new coal and gas projects are in the government pipeline and if all of these are carried out, the country’s emissions would increase by 250 per cent.

So far the Greens are the only party to pledge to end burning, exporting, and mining of thermal coal by 2030, in line with their pledge to be carbon neutral by 2035.

Shock greeted a recent revelation that China has signed a security deal with the Solomon Islands, with the opposition Labor party accusing Prime Minister Scott Morrison of dropping the ball on Australia’s leadership in the Pacific.

Climate change poses an existential threat to the island nations of the Pacific, with low-lying countries like Tuvalu already disappearing due to rising sea-levels, and an increase in cyclones and extreme weather also battering larger nations like Fiji.

Labor has pledged over €350 million in development aid to the Pacific region, with some earmarked for patrolling illegal fishing and helping Pacific nations to tackle climate change, including disaster relief centres.