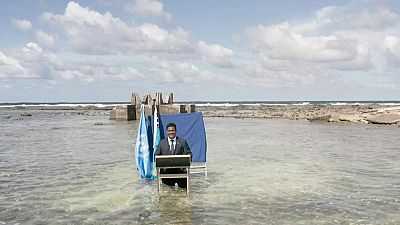 Tuvalu's Foreign Minister Simon Kofe standing thigh-deep in seawater off the coast of Tuvalu as he addresses delegates at the COP26 conference in Glasgow on November 9, 2021.   -   Copyright  AFP / MINISTRY OF JUSTICE-COMMS AND FOREIGN AFFAIRS TUVALU
By Josephine Joly  •  Updated: 09/11/2021

"We want the big emitters to take action in addressing climate change."

That's how the Foreign Minister of the island nation of Tuvalu, Simon Kofe, feels about COP26 negotiations, as the effects of climate change are even more pressing for those who live in island nations.

There's a good chance that you may never have heard of the island nation of Tuvalu until this week.

A video of Tuvalu's Foreign Minister's speech addressed to the world leaders attending the COP26 climate talks in Glasgow has gone viral and for good reason.

"We had planned to deliver a message that would appeal to the people and give them a feel of the impacts of climate change in Tuvalu, but we didn't expect it to go viral as it has in the past few days," Simon Kofe told Euronews.

Kofe gave his speech standing knee-deep in seawater in a bid to raise awareness on how his low-lying Pacific island nation is on the front line of climate change and could literally disappear because of rising sea levels and land erosion.

"Where I was standing and filming, as you can see behind me, there's that concrete base that was actually built by the Americans during World War Two. As you can imagine, this base used to be on land and it's now in the middle of the sea, about 20 or 30 metres from the land. So we are experiencing land erosion. Certain parts of the island are underwater during high tide. These are just a few examples of the threats that we are facing," Kofe revealed.

His idea was to show world leaders what it is like to feel the impacts of climate change firsthand.

The message we are sending to the leaders is for them to look beyond their immediate interests and look at the global well-being and recognise that we live in an interconnected world. Things you do on one side of the world have an impact on all of us.

Tuvalu's Foreign Minister hopes the leaders will recognise the importance and urgency of the climate crisis, and urged them to believe the science "that is out there".

"But I think that beyond that, the message we are sending to the leaders is for them to look beyond their immediate interests and look at the global well-being and recognise that we live in an interconnected world. Things you do on one side of the world have an impact on all of us."

**Watch the video above to see the speech.
**

COP26 latest: 'We still have a mountain to climb,' says summit chair