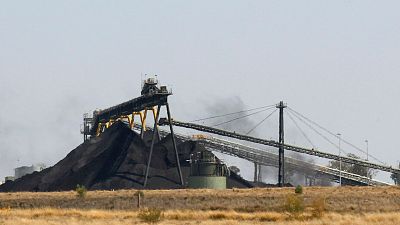 Coal is stacked at a Whitehaven Coal mine outside Narrabri, Australia.   -   Copyright  Rob Griffith/AP Photo
By Rosie Frost  •  Updated: 21/10/2021

Comments from some of the most polluting countries in the world sought to “water down” a landmark UN climate report, according to leaked documents seen by Greenpeace UK’s investigative journalism unit.

More than 30,0000 comments from governments, academics, companies and others on the IPCC’s draft ‘Working Group II’ report were shown to Greenpeace Unearthed.

They reveal that a small number of nations wanted parts of the report that would threaten their economic interests to be changed.

China, Saudi Arabia, India and Australia were among those who submitted comments urging scientists to downplay or “omit” phrases about the need to transition away from fossil fuels. Officials from the Australian government reportedly questioned the need for all of its coal-fired power plants to close as part of efforts to tackle the climate crisis.

The Organisation of the Petroleum Exporting Countries (OPEC) represents 13 major oil-producing nations. It asked the authors to remove the statement: “If warming is to be restricted to 2°C, about 30% of oil, 50% of gas, and 80% of coal reserves will remain unburnable”.

India, alongside several eastern European countries, recommended that the report should be more positive about the role of nuclear power.

Reducing the consumption of meat was also an issue for economies that rely on animal agriculture. Two of the world’s largest beef producing countries, Brazil and Argentina, wanted recommendations about the planetary benefits of a plant-based diet removed, says Greenpeace.

Officials from Argentina requested that references to the “Meatless Monday” campaign and taxes on red meat be omitted too.

Assessment reports are produced roughly every six to seven years by the IPCC, the UN group that evaluates climate science. They bring together the best scientific evidence available to decide what global action is needed to combat climate change.

Governments, companies and other invested parties submit comments to the IPCC as part of its scientific review process. But it has no obligation to include their recommendations in the reports. The document also shows that the majority of comments were constructive and aimed at improving the authors work.

“Scrutiny is essential,” says a spokesperson for the UN group. “It strengthens the credibility and integrity of the reports. But the ultimate text of the IPCC reports is decided by scientists, based exclusively on underlying scientific evidence.”

The review process is (and always has been) absolutely fundamental to the IPCC’s work and is a major source of the strength and credibility of our reports.

The IPCC says it doesn’t comment on the content of draft reports while work is still ongoing out of respect for the authors’ work. It does however say that its processes are “designed to guard against lobbying - from all quarters”.

“The review process is (and always has been) absolutely fundamental to the IPCC’s work and is a major source of the strength and credibility of our reports.”

Whether or not these comments are taken into account, what the leak does reveal is how these countries are positioning themselves ahead of negotiations at COP26, raising questions about their commitment to these crucial climate talks.