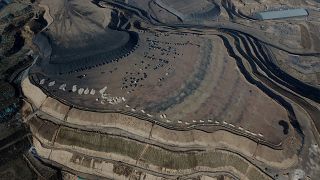 This aerial view shows coal being loaded onto trucks near a coal mine in Datong, China's northern Shanxi province, 2021.   -   Copyright  NOEL CELIS/AFP or licensors
By Maeve Campbell  with Reuters  •  Updated: 07/03/2022

China will introduce new incentives to cut pollution and carbon emissions this year, but flexibility and stability remain the country's top priorities as economic pressures mount, says the government.

China's environmental commitments have come added under scrutiny this year as it tries to shore up growth and reduce the impact of stringent COVID-19 control policies on its economy and supply chains.

President Xi Jinping said in a speech in January that the country's ambitious low-carbon goals should not come at the expense of energy and food security or the "normal life" of ordinary people.

China's government work report, delivered to the annual session of parliament by Premier Li Keqiang on Saturday, said that the major priorities in 2022 would be as follows:

President Xi Jinping said the country's ambitious low-carbon goals should not come at the expense of the "normal life" of ordinary people.

Li said China would "work harder" to make coal use cleaner and more efficient, update coal-fired power plants to make them more efficient, and enhance the capacity of grids to absorb power produced by renewable sources.

Efforts to reduce coal consumption and bring emissions to a peak would be done in a "well-ordered way", he added, but environmentalists are skeptical.

The Chinese government has also been known to artificially modify the weather in cities like Beijing, through a process called cloud seeding, which has sparked controversy over the effects this has on the natural environment.

China, the world's biggest source of climate-warming greenhouse gas emissions, has pledged to become carbon neutral by around 2060, with emissions peaking before 2030.

A separate report published by the state planning agency on Saturday said China would "balance development and emission reductions as well as current needs and long-term benefits".

The National Development and Reform Commission (NDRC) said "an appropriate level of flexibility" on energy consumption in order to keep the economy steady would work, and it warned against the "overly simplistic and mechanical" implementation of policies by local governments.

Will China carry through on its green commitments?

Environmental groups have expressed concern that fears about the economy would lead China to backslide on its environmental promises.

Energy and coal use in the world's biggest carbon emitting country grew at their fastest rate in a decade last year, and China has also started building large amounts of new coal-fired power capacity.

There was no annual target for energy intensity - the amount consumed per unit of GDP - in the Saturday government work report, and it also said China would not include major national projects in state energy consumption control targets.

However, the work report promised to take stronger action to treat pollution in major rivers, lakes and bays, and boost recycling.

At the same time, the NDRC said large-scale afforestation would continue this year.

In another annual report published on Saturday, the finance ministry also said it would raise the budget for air pollution by 2.5 billion yuan to 30 billion yuan (€4.4 billion) this year, in order to support the transition to clean winter heating. The water pollution budget was also raised.

The finance ministry stated that it would slash corporate income tax rates for third-party enterprises involved in cutting pollution, and work to establish a national fund to support the low-carbon transition.