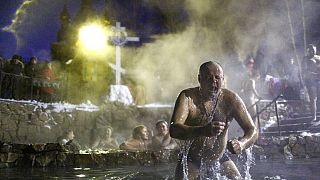 Orthodox Christians in Russia and Ukraine have marked the Epiphany holiday amid a war.

Orthodox Christians in Russia and Ukraine have marked the Epiphany holiday amid a war.

Epiphany remembers the baptism of Jesus by John the Baptist, which according to the Orthodox calendar occurred on 19 January. It's one of the oldest holidays on the Christian calendar.

In cities across Russia and Ukraine, residents stripped off and plunged into icy pools and bodies of water, even as fierce fighting rages on and Moscow's war in the neighbouring country inches closer to the one-year mark.