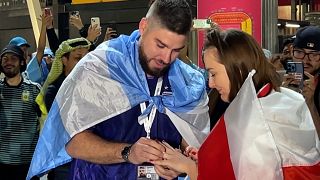 Dozens of Uyghur demonstrators gathered outside the Chinese consulate in Istanbul to protest a fire last week in China’s northwestern Xinjiang region that killed 10 people. In the meantime, several hundred protested in Beijing in a rare outpouring of public anger against the state, calling for an end to the strict COVID-19 measures.

Nearly 14,000 seabirds have died due to avian flu during the last two weeks in Peru.

More than 2,000 people from dance academies all over Venezuela shimmied to the rhythms of salsa music in an attempt to beat the Guinness World Record for the largest "Rueda de Casino dance," or Casino dance circle.

An Argentinian fan proposed to his Polish girlfriend during a televised interview in Doha, minutes before the FIFA World Cup match between Poland and Argentina.

And London Zoo got in the festive spirit as lions and squirrel monkeys opened advent calendars.