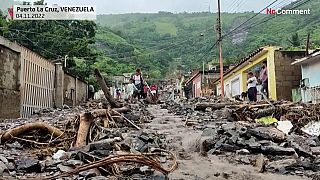 Intense rains and landslides have left at least seven people dead and have affected some 330 houses in Anzoategui, in eastern Venezuela.

Intense rains and landslides have left at least seven people dead and have affected some 330 houses in Anzoategui, in eastern Venezuela.

"From the situation in Guanta, a landslide has left the unfortunate result of the death of a child. Our condolences to his family," the state's governor Luis Marcano wrote on his Twitter account.

The tragic event occurred in Guanta, a city located northwest of Anzoategui, where some 30 houses were damaged due to the rains.

"My son was there. When the landslide happened, it took him and the woman taking care of him and my daughter. She survived, but my son died - drowned," recounted resident Edwin Sánchez, father of the deceased child.

Rescue teams also located three bodies on Friday in the Valle Verde sector of the Sotillo municipality, some 250 kilometres east of Caracas.

For the past five weeks, nearly 14,000 families have been affected by the heavy rains, floods and landslides that have ravaged the South American country.