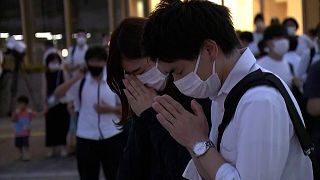 People starting to gather at the site of where the Former Japanese prime minister Abe Shinzo was shot and killed.

Police in Japan have revealed the motive behind the assassination of former Prime Minister Shinzo Abe as being linked to his connections with a "specific group."