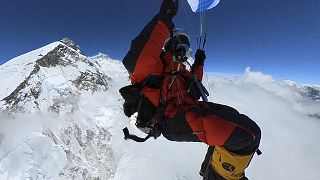 A South African paraglider has made the first legal flight off Mount Everest, an expedition organiser said Tuesday, opening doors for "climb and fly" adventurers on the world's highest mountain.

Pierre Carter, 55, leapt off near the summit at an altitude of nearly 8,000 metres (26,247 feet) last week, cruising above the Himalayas as other mountaineers descended on foot.

Carter flew down at a top speed of 80 kilometres (50 miles) per hour, taking only 20 minutes to land near the small settlement of Gorakshep at 5,164 metres.