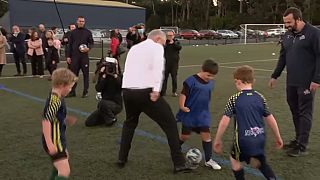 On the campaign trail on Wednesday, Australian Prime Minister Scott Morrison barrelled into a young boy during a friendly kick around, eliciting a chorus of stunned "ooohs" and "aaaws" from spectators.

Morrison was playing a five-a-side football game in northern Tasmania, where he is trawling for votes ahead of Saturday's nail-biter election.