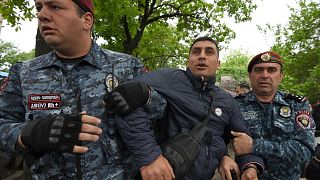 Dozens arrested as Armenia opposition protests up pressure on PM

Anti-government protests spread throughout the Armenian capital Tuesday as opposition parties mounted pressure on Prime Minister Nikol Pashinyan over his "treacherous" handling of a territorial dispute with arch-foe Azerbaijan.

Protests erupted in Yerevan on Sunday with the opposition demanding Pashinyan's resignation accusing him of plotting to cede to Baku all of the disputed Nagorno-Karabakh region.

These are the worst protests since the elections last September, highlighting continued bitterness over Pashinyan's leadership during a war in 2020.