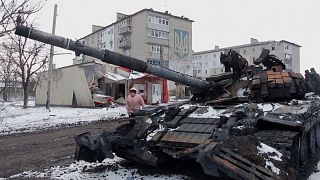 Heavy fighting leaves much of Volnovakha in ruins

Heavy fighting leaves much of Volnovakha in ruins

Much of the eastern Ukrainian town of Volnovakha lay in ruins on Friday after heavy fighting between Ukrainian troops and separatist forces supported by Russia.

Much of the eastern Ukrainian town of Volnovakha lay in ruins on Friday after heavy fighting between Ukrainian troops and separatist forces supported by Russia.

Residential buildings and streets were destroyed by artillery fire as separatist forces captured the town.

The remaining residents of the town, which is without water and electricity, were making fires in their courtyards to warm up and to heat water.

A Russian bombing caused extensive damage in the village of Baryshivka, about 50 kilometres east of Kyiv, on Friday.

No casualties were reported and residents said no one was injured.

A building hosting a restaurant and an old cinema was largely damaged, and windows of nearby houses had all their windows and doors shattered.

Ukrainian military did not report any casualties in the area.

Russia's war on Ukraine is now in its third week, and Russian President Vladimir Putin has approved bringing in "volunteer" fighters from the Middle East and elsewhere to join the fight.

Ukraine says 100,000 people were evacuated over the past two days in a total of seven cities in the north and center of the country.

More evacuations are expected, though repeated attempts to reach the besieged port city of Mariupol in the south have failed amid continued Russian shelling.