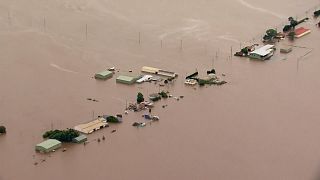 Police in Sydney said they recovered the bodies of two people from waters after their car was found in a stormwater canal in the city's western suburbs.

Sydney recorded up to 100 millimeters (4 inczes) of rain.

Australia's east coast has had an extraordinarily long stretch of torrential rain and major flooding in the last two weeks.