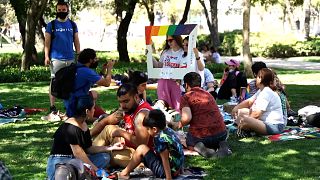 A picnic to celebrate equal marriage law in Chile

A picnic to celebrate equal marriage law in Chile

Same-sex couples and families gathered Saturday in the sunny Chilean capital Santiago, celebrating a yearly picnic that for a decade was their flagship protest for an equal marriage law.

Same-sex couples and families gathered Saturday in the sunny Chilean capital Santiago, celebrating a yearly picnic that for a decade was their flagship protest for an equal marriage law.

After the approval of an equal marriage law in 2021, the organizers decided this to be the last of their peaceful and colorful rallies.

The organization started in 1991, demanding rights for LGBT people in Chile.

MOVILH had recently surveyed thousands of same-sex couples, with the majority of them planning to marry when the law takes effect in late March. Chile decriminalized sex between consenting adults of the same sex in 1999 and outlawed arbitrary discrimination in 2012.

In 2015, then President Michelle Bachelet signed a law permitting gay civil unions and in 2017, introduced the bill to allow same-sex marriages. The initiative was finally approved by Congress in December 2021, under the administration of Sebastian Piñera.