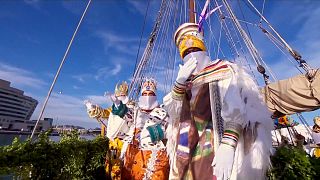 The Three Kings, also called the Three Wise men, have finally arrived on Wednesday in Barcelona onboard a ship docking at the city's port.

The night of January 5th is the most important and magical night of the year for thousands of children in Spain. It is when the Three Wise Men, Caspar, Balthasar and Melchior, bring them presents. Parades are organised across the country to welcome them.

The Epiphany parade or the Three Kings Parade performed along the streets of different cities symbolises the Biblical journey of the Three Wise Men to worship and bring gifts to the baby Jesus after following a star in the heavens.

The parade is an essential part of Spain’s Christmas traditions and one of the most magical nights of the year for both children and parents.

During the parade known in Spanish as “Cabalgata”, each King rides a separate float sitting on a high throne, surrounded by his courtiers who throw sweets into the crowd.