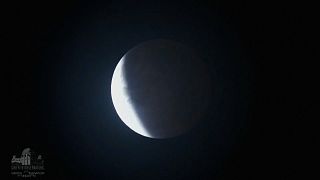 The longest partial lunar eclipse in nearly 600 years, which will bathe the Moon in red, was visible for a big slice of humanity on Friday.

The celestial show will see the lunar disc almost completely cast in shadow as it moves behind the Earth, reddening 99 percent of its face.

The spectacle was visible for all of North America and parts of South America from 0602 GMT Friday, and may later be seen in Polynesia, Australia and northeast Asia.