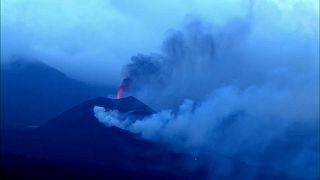 The Cumbre Vieja volcano on Spain's La Palma Island continued to erupt on Wednesday. Footage showed lava spewing from the volcano that has been erupting since September 19. Local news outlets reported on Saturday that a 72-year-old man died at a family home in the exclusion zone. The man was the first victim of the eruption.

Scientists have advised the eruption could last up to three months.