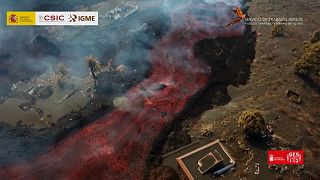 Three weeks since its eruption upended the lives of thousands, the volcano on Spain’s La Palma island was still spewing out endless streams of lava with no signs of ceasing on Monday.

The images show the lava flow from the volcano on the island of La Palma carrying what are believed to be house-sized lumps of solidifying lava.

The pictures were released by Spain's Geological and Mining Institute.

Officials said the molten rock from the crater is now flowing down a so-called lava tube beneath earlier hardened lava, straight into the sea.

That has eased fears it could spread wider and cause more destruction.

Authorities on Sunday monitored a new stream of molten rock that has added to the destruction of over 1,100 buildings.

Anything in the path of the lava - homes, farms, swimming pools and industrial buildings in the largely agricultural area - has been consumed.

The collapse on Saturday of part of the volcanic cone sent a flood of bright red lava pouring down from the Cumbre Vieja ridge that initially cracked open on September 19.

The fast-flowing stream carried away huge chunks of lava that had already hardened. An industrial park was soon engulfed.

La Palma is part of Spain’s Canary Islands, an Atlantic Ocean archipelago off northwest Africa whose economy depends on the cultivation of the Canary plantain and tourism.

The new rivers of lava have not forced the evacuation of any more residents since they are all staying within the exclusion zone that authorities have created.

Some 6,000 residents were promptly evacuated after the initial eruption.