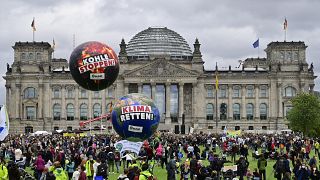 Swedish climate activist Greta Thunberg addresses the crowd in Berlin at the Fridays for Future protest. Tens of thousands of climate activists including Greta Thunberg have begun descending on German cities to crank up the pressure on candidates competing to succeed Angela Merkel at this weekend's general election.

Hundreds of people rallied in a Prague square to protest what they say is insufficient government action to combat climate change.Czech schoolchildren representing the worldwide movement Fridays for Future made up the bulk of protesters in Prague's Malostranske Namesti.

Hundreds of protestors flooded the streets in Rome to make a stand against climate change. Protesters met in a central square in Rome and marched with flags and banners through the heart of the city. The global 'strike' against the climate crisis involved other cities and thousands of people around the world.

Dozens of Indian students and climate activists march in New Delhi as part of the global "Youth for Climate" movement.