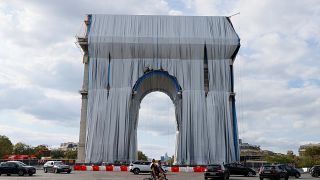 The Arc de Triomphe has seen parades, protests and tourists galore, but never before has the war monument in Paris been wrapped in silver and blue recyclable polypropylene fabric.

That is what's happening in a posthumous art installation designed by artists Christo and Jeanne-Claude as the façade on the Champs-Elysee side of the Napoleon-era arch was wrapped on September 12.

The idea for "L'Arc de Triomphe, Wrapped," was formed in 1961, when Christo and Jeanne-Claude lived in Paris.

The 14 million-euro (US$16.4 million) project is being self-financed through the sale of Christo's preparatory studies, drawings, scale models, and other pieces of work, said Christo's nephew Vladimir Yavachev.

Visitors to the foot of the Arc de Triomphe during the installation, scheduled for September 18 to October 3, will be able to touch the fabric, and those climbing to the top will step on it when they reach the roof terrace, as intended by the artists.

Born in Bulgaria in 1935, Christo Vladimirov Javacheff met Jeanne-Claude Denat de Guillebon, born in Morocco on the exact same day as him, in Paris in 1958.

The artists were known for elaborate, temporary creations that involved blanketing familiar public places with fabric, such as Berlin's Reichstag and Paris' Pont Neuf bridge, and creating giant site-specific installations, such as a series of 7,503 gates in New York City's Central Park and the 24.5-mile "Running Fence" in California.