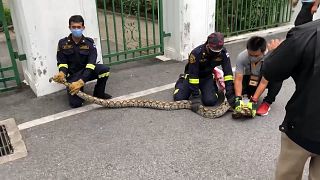 Parkgoers in Bangkok looking for relief from renewed coronavirus restrictions got a slithering surprise Thursday when a python as long as two of the Thai capital's ubiquitous motorbikes was spotted up in a tree.

The reticulated python was only the latest big serpent to turn up in the densely populated centre of Bangkok, where urban sprawl eating into natural habitats has been blamed for a rise in snake sightings in recent years.

This one was found in Benjasiri Park, which is flanked by towering hotels, apartment buildings and several high-end shopping malls that are largely off-limits due to new restrictions put in place this week to stem a surge in virus cases.

As joggers rounded a nearby running path, firefighters were called in to help park staff capture the snake.

The python plotted its escape, heading for a building on the edge of the park that houses the World Fellowship of Buddhists. But firefighters were there waiting for it.

One used a stick to grab the python by the neck, and another tried to cut the branch it was on. They soon coaxed it into a sack and carried it away.

He said his department alone has caught one or two snakes per day during the current rainy season, mostly in residential neighbourhoods or houses with pets.