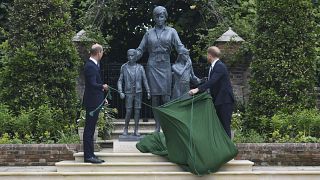 Princes William and Harry unveiled a statue of their mother, Princess Diana, on what would have been her 60th birthday Thursday in a small, and brief, ceremony at London's Kensington Palace.

The statue is the creation of sculptor Ian Rank-Broadley.

Diana’s family joined the two brothers for the ceremony at the palace's Sunken Garden, a place in which the princess once found solace.

It was the first time the brothers have appeared in public together since the funeral of their grandfather, Prince Philip.

The brothers later issued a joint statement in which they described their mother's strength and character as “qualities that made her a force for good around the world".