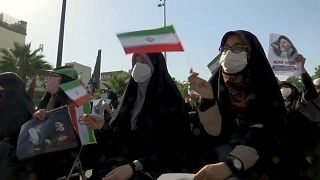 Iran's leaders not in tune with voter demographic as election looms

Iranian voters are heading to the polls amidst of one of the country’s harshest economic crises, made worse by the devastating effects of the COVID-19 pandemic.

“It's about politics. It's about corruption. It's about lack of economic opportunity. It's about high inflation. It's about Iran's isolation in the world and the very serious age gap between the people who lead Iran and the population, which is demographically young. Those people, the majority population, feel that the bearded men have nothing to say in response to their daily crises and trying to make a living," says Anoush Ehteshami, a Professor of International Relations at Durham University in the UK, who thinks Iran has got multiple crises to manage, making Friday’s vote even more important. Ehteshami went on:

“These are the most uncontested elections in the Islamic Republic's history. The population at large is unhappy with the way in which the regime has responded to the crisis. And they look at the neighbouring countries in the way in which they have managed to bring the infection rates under control to provide vaccines much more widely than Iran has done… One view is that the voter turnout is going to be so low as to raise questions about the legitimacy of the elections”

Watch Euronews’s full report in the player above.