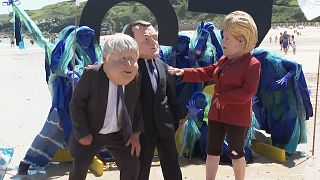 Members of the Extinction Rebellion climate activism group gathered in St Ives on Sunday as the three-day G-7 summit came to a close.

The "All Hands On Deck" protest, which involved hundreds of activists, was held close to where the summit was being held in Carbis Bay on the southwestern tip of England.

Hundreds of surfers and kayakers paddled out to sea to urge better protection for the world's oceans.