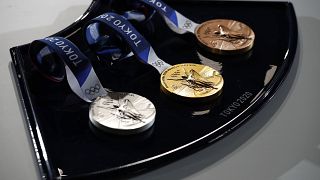 Tokyo 2020 president Seiko Hashimoto expresses her confidence about hosting the Games despite the lingering uncertainty, "I feel like I can hear the sound of the athletes' footsteps heading to Tokyo."

Polls show 80 percent of Japanese oppose hosting the Games this year. But surveys among the population of Tokyo have found a more even split between those in favour and against.

Hashimoto said she believed the tide of public opinion could be turning as Japan's initially slow vaccine campaign begins to speed up.

"We are hearing more and more voices from people saying 'if this is the case, the Olympics may be able to take place'," she said, reiterating that the Games will be safe for all.

But in a sign of the challenges ahead, a member of Ghana's Under-24 Olympic football team tested positive upon arriving in Japan for a friendly late on Wednesday, the Japan Football Association said.

All of Ghana's team, who will play Japan's U24s on Saturday, tested negative in the 72 hours before their departure.

Japan has seen a smaller Covid-19 outbreak than many countries, with just over 13,000 deaths. Around 2.9 percent of the population has been fully vaccinated.