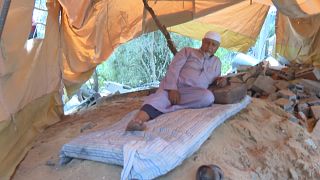 A UN official in war-battered Gaza Sunday called for a "genuine political process" to avert further bloodshed, after the military conflict between Israel and Islamist group Hamas that ravaged the Palestinian enclave.

As thousands of Gazans slowly tried to piece back together their lives, top UN staff visited the territory after an Egyptian-brokered ceasefire Friday halted 11 days of mutual bombardment, where they warned of the deep psychological trauma of the violence.

On Sunday, in a badly-damaged district of Gaza city, volunteers swept up clouds of dust at the feet of collapsed buildings, while others shovelled debris onto the back of a donkey-drawn cart.

Israeli air strikes on the Gaza Strip since May 10 have killed more than 200 Palestinians, rendered thousands homeless and laid waste to buildings and key infrastructure across the blockaded territory.

It was the latest such bombardment to hit the crowded coastal strip of some two million people, after three previous wars with Israel since 2008.