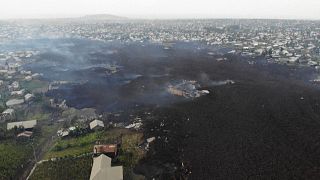 Lava from eruption destroys some homes in Goma

A river of boiling lava came to a halt on the outskirts of Goma Sunday, sparing the city in eastern DR Congo from disaster after the nighttime eruption of Mount Nyiragongo sent thousands of terrified residents fleeing in panic.

But the military governor of North Kivu province said "the city was spared" after "the lava halted near Buhene on the outskirts of Goma".

Five people were killed in accidents during the evacuations, said General Constant Ndima, who was appointed governor early this month when the province was placed under a "state of siege" to combat violence by armed groups.

Thousands had fled during the night and many families slept on pavements surrounded by their belongings under a night sky turned red by fire and fumes.

And around a dozen earth tremors were felt in the early hours.